Bronx, NY – Members of Bronx Brigade, a campaign fighting to increase the number of good, middle-class construction jobs for residents in the Bronx marched to State Senator Luis Sepúlveda’s district office on October 2, 2019 and protested his failure to support state legislation that would raise wages for thousands of union and nonunion construction workers – including many who are immigrants, people of color, and women.

Speakers called on Sepúlveda to stand with the diverse working-class and immigrant communities he represents in the Bronx.

This event was organized by the Bronx Brigade, a campaign fighting to increase the number of good, middle-class construction jobs for residents in the Bronx.

“The Bronx is rapidly gentrifying. Elected officials like State Senator Luis Sepúlveda must do everything in their power to ensure that new developments funded with taxpayer dollars create good-paying construction jobs for local Bronx residents who want to continue to live in the neighborhoods they call home,” Laborers’ Local 79 Business Manager and lifelong Bronx resident Michael Prohaska.

“In this important fight for higher wages for construction workers, State Senator Sepúlveda can either stand with the diverse working-class communities of his district or with the wealthy developers trying to get rid of us. He can’t do both. Sepúlveda should use his power to help raise wages for the many immigrants, people of color, and women who are ready to build the future of the Bronx,” said Laborers’ Local 79 rank-and-file member and Bronx resident Tafadar Sourov.

“As a prominent champion of immigrants, State Senator Luis Sepúlveda should know that raising wages for construction jobs will help many immigrant residents in his district who do this difficult, and often dangerous, work. Any elected official from the Bronx who is truly pro-immigrant will fight hard for better jobs and higher wages for immigrants. We marched to Sepúlveda’s office to let him know he must do more to help the construction workers living in the district,” said Laborers’ Local 79 Executive Board Member and President of 100 BCW Barrie Smith.

Participants in the march today included members and leaders of the Bronx Brigade, Greater New York LECET, and Laborers’ Local 79, along with Bronx residents who live in Sepúlveda’s district and Bronx community leaders. 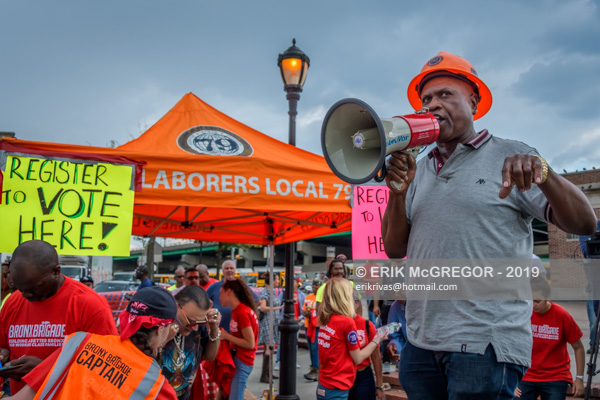