The event, co-organized by Rachel Ejsmont, Robert Banks and international animal rights powerhouse, Jenny McQueen vows to consistently disrupt businesses who exploit and profit off the torture of defenseless animals like the gentle “Orylag Rabbits”.

Prada was their main target last year. Along with other cities and campaigns pressuring the fashion designer, our collective efforts, store disruptions and winter long demos resulted in Prada finally ditching fur from their collections.

It was a huge victory- countless animals were spared! Thank you to all who spoke up for the innocent victims of the fur trade -death trade! NEXT TARGET IS DOLCE & GABBANA!

75% of New Yorkers have voted in favor of Intro 1476, a bill which would make sales of NEW real fur illegal in NYC. Let’s remind this blood money fueled industry that “animals are not fabrics, animal abusers are not welcome in NYC”.

Power in numbers! We ask all activist attending the Official Animal Rights March NYC to please UNITE, ATTEND and SCREAM for the countless fur bearing animals begging for mercy, senslessly killed for their fur in the most horrific ways- for nothing more than to decorate clothing apparel, home decor, to be worn as a social status, and vanity. 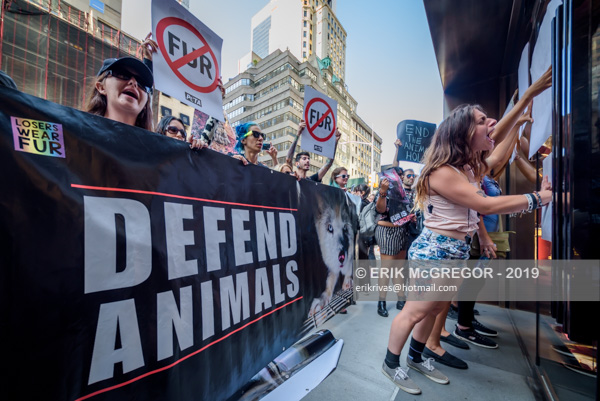