Survivors of solitary, legislators, and other advocates called Cuomo for urgent enactment of the HALT Solitary Confinement Act

New York, NY – Survivors of solitary confinement, New York State legislators, family members of people in solitary, and other advocates held a series of rallies across the state to call attention to the ineffective solitary confinement regulations proposed by Governor Andrew Cuomo. Advocates demanded that New York follow the will of a majority of state legislators and vote to pass the Humane Alternatives to Long-Term (HALT) Solitary Confinement Act (S.1623/A.2500). Advertised as reform, Gov. Cuomo’s regulations would continue to permit endless solitary confinement through cycling in and out of supposedly time-limited solitary and indefinite sentences to alternate units that amount to solitary by another name. Unlike the Governor’s proposal, HALT would end the torture of prolonged solitary confinement for all people, eliminate it altogether for especially vulnerable populations, and create more humane and effective alternatives.

On August 28, Governor Cuomo issued proposed DOCCS regulations for state prisons and separate proposed SCOC regulations for local jails concerning solitary confinement. Advertised as reform, these proposed regulations are woefully inadequate, and will continue to allow countless people to be subjected to the endless torture of solitary confinement in New York prisons and jails, even for minor infractions. The Governor wants a system that gives prison and jail officials discretion to torture people indefinitely and we want to categorically end that abuse. Thanks to efforts led by survivors of solitary and their family members, there are more than enough votes in the Legislature to pass the Humane Alternatives to Long-Term (HALT) Solitary Confinement Act, S1623/A2500, which truly ends the torture of prolonged solitary confinement for all people and replaces it with more humane and effective alternatives.

While human rights standards adopted by the United Nations state that solitary beyond 15 days is torture, New York State regularly holds people in solitary for months, years, and decades. Thousands of people are held in solitary confinement in New York’s prisons and jails each day, and tens of thousands each year experience this torture: 22 to 24 hours a day in a cell without any meaningful human contact or programs. They are disproportionately Black and Latinx people, young people, gender non-conforming people, and people with mental illness. Nearly 1,000 people with diagnosed pre-existing mental health needs are in solitary confinement each day and more than 30% of suicides in state prisons occur in these units.

The Humane Alternatives to Long-Term (HALT) Solitary Confinement Act has enough votes to pass in the Legislature. As of June 14, 34 New York State Senators from Long Island to Upstate New York are officially co-sponsoring the HALT Solitary Confinement Act – a clear majority – and additional Senators have committed to vote for the bill, as well. 79 New York State Assembly Members also officially co-sponsor HALT – another clear majority – and the bill passed in that house last year.

People continue to spend months, years, and decades in solitary (including 30+ years) in NY. The sensory deprivation, lack of normal interaction, and extreme idleness of solitary can lead to intense suffering and severe psychological, physical, and even neurological damage. More than 30% of all prison suicides in New York take place in solitary.

The entire United Nations, including the US, passed rules prohibiting solitary beyond 15 days for any person, because it otherwise would amount to torture. Colorado has implemented a 15-day limit in its prisons and reduced the number of people in solitary from 1,500 to 18. The HALT Solitary Confinement Act (S1623-Sepulveda/A2500-Aubry) similarly includes a 15-day limit on solitary, and would create more humane and effective alternatives. A summary of the bill can be found here. The bill passed the State Assembly for the first time in 2018 by a vote of 99 to 45.

States that have reduced the use of solitary have seen a positive impact on safety for both incarcerated people and staff. Survivors of solitary, family members, and other community members and advocates are calling for New York State Legislators and Governor Cuomo to pass HALT immediately. 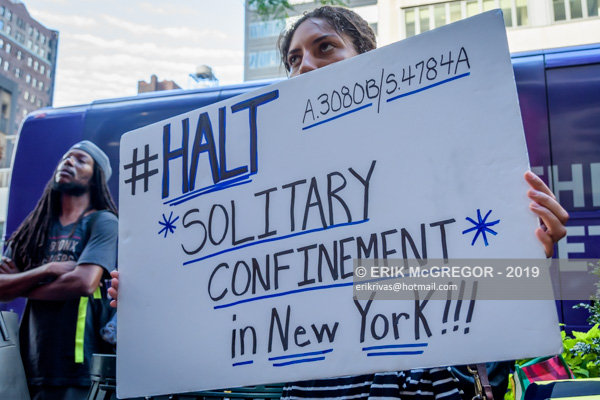