New York, NY – Members of the AIDS Coalition To Unleash Power (ACT UP), Housing Works and GMHC held a protest on November 9, 2022 outside the NY District Attorney’s office at 1 Hogan Place in Manhattan to oppose District Attorney Alvin Bragg’s decision to classify a New York resident and force him to register as a sex offender for an out-of-state conviction based solely on their HIV status for otherwise lawful conduct in New York. In a court brief, D.A. Bragg’s office praised HIV-specific exposure laws as “preventing any further transmission of HIV.” which is flatly untrue. Such criminal laws have been condemned by every reputable public health organization and are based on outdated science that promotes fear and stigma.

The demonstration comes in response to New York District Attorney Alvin Bragg’s decision to classify a New York resident as a sex offender under the 1996 Sex Offender Registry Act (SORA) based on their conviction under a 1987 Louisiana law called “Intentional Exposure to AIDS Virus.” Statutes like these single out people living with HIV (PLHIV) for engaging in consensual conduct before disclosing their HIV status to their partner, even when there is little or no risk of transmitting the virus.

Such outdated laws do not exist in New York and have been indisputably refuted by organizations like Centers for Disease Control (CDC), World Health Organization (WHO), American Psychological Association (APA), and various others, so activists say it’s odd that Bragg’s office would pursue such a case.

“Louisiana still has sodomy laws on the books, so would D.A. Bragg also pursue adding LGBTQ+ people who break Louisiana’s sodomy laws and move to New York to the sex offender registry? I would hope not,” said Brandon Cuicchi of ACT UP NY.

Activists are requesting that the D.A. office drop its pursuit of the current case and support reversal of the latest Apellate Division decision in it. They want the office to commit that it will not pursue cases that single out people with HIV for extra punishment and to outline steps about what it will do in the future to ensure that problematic positions around HIV are not taken. 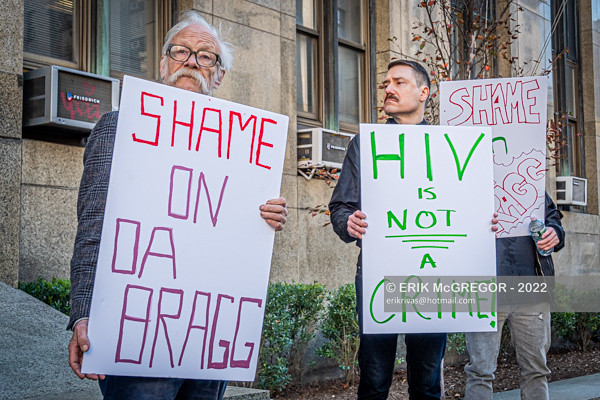