The groups also supported similar actions held outside BlackRock Headquarters and TIAA Headquarters to denounce their failure to meet commitments against deforestation with visually stunning content representing the voices of people who’ve been affected by landgrabbers setting fires supported by these corporations.

Together with supporters and local environmental and human rights activists, they delivered a mural made from burned forest ash – a symbol for the catastrophic forest fires that are a result of the deforestation and the climate crisis these companies are responsible for.

They also delivered more than 200,000 signatures urging the self-styled corporate environmental coalition to meet its commitments to end deforestation and related human rights violations in its supply chains.

The Consumers Good Forum, a coalition of many of the world’s biggest consumer brands such as Mondelēz (Oreo, Wheat Thins) and Procter & Gamble (Tide, Head & Shoulders), are greenwashing themselves as environmental champions while they continue to drive rampant deforestation, human rights abuses, and climate chaos.

From grievances involving land grabs as well as violence toward Indigenous land and human rights defenders to recent and mounting evidence of continued deforestation in their supply chains, these businesses and the executives that run them are profiteering off chaos and destruction.

Delivering petition signatures from more than 200,000 people from around the world, Rainforest Action Network, Friends of the Earth and SumOfUs are calling the Consumer Goods Forum to meet its climate commitments as well as to stop land grabbing and deforestation of Indigenous land.

From abuses including rampant land grabbing and violence against Indigenous land and human rights defenders to recent and mounting evidence of continued deforestation in their supply chains, these businesses and the executives that run them are profiteering off chaos and destruction. 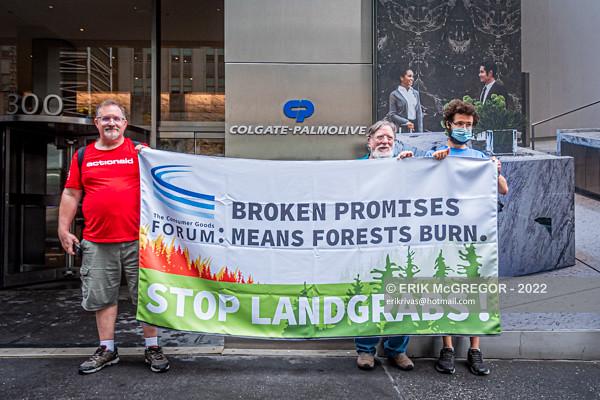