This action comes on the heels of a recent investigation revealing that Marsh, the world’s largest insurance broker and a subsidiary of Marsh McLennan, has been hired to arrange insurance coverage for the construction of EACOP. All new fossil fuel projects need insurance to move forward, and EACOP is no exception. However, the pipeline’s backers – TotalEnergies and China National Offshore Oil Corporation – have not found insurers willing to cover it yet, in light of the massive environmental, social, and reputational risks of the project.

If constructed, EACOP would be the longest heated crude oil pipeline in the world, transporting oil 1443 kilometers from Uganda to Tanzania and emitting an estimated 34 million tonnes of carbon emissions annually at peak production. The project has already displaced thousands and threatens the water resources and livelihoods of millions of people.

Following a groundswell of pressure from community members impacted by the pipeline and campaigners around the world, 8 insurers, 20 banks, and 4 export credit agencies have committed to not support EACOP to date. Many of them, like Munich Re, state that the project is not in line with their Environmental, Social and Governance commitments.

“These commitments from banks and insurers reflect the fact that EACOP is facing serious risks that financial institutions do not want to support: the destruction of ecologically diverse and wildlife-rich regions, a massive carbon footprint, and mounting community resistance,” said Omar Elmawi, the #StopEACOP Coordinator. “The #StopEACOP campaign is gaining momentum, and we are turning our attention to Marsh and the remaining potential insurers and financiers of the project. They all have a decision to make, we hope they choose wisely because our lives depend on it”

Within Marsh McLennan itself, the project is highly controversial. Last year, more than 100 employees across the company and its subsidiaries wrote a letter to company leadership urging Marsh to stay away from EACOP.

Marsh has also previously come under fire for involvement in other controversial fossil fuel projects, including the Adani Carmichael coal mine and Trans Mountain tar sands pipeline. Last week, after years of pressure, it was confirmed that Marsh ended its relationship with the Adani coal mine.

“It’s time for insurance brokers to get the message: insuring fossil fuel expansion projects like EACOP represents a massive reputational risk for the company,” said Elana Sulakshana, Senior Energy Finance Campaigner at Rainforest Action Network. “From EACOP to Trans Mountain, a growing number of employees and activists around the world are calling on Marsh to stop enabling the climate crisis and human rights violations.”

Within just a few days of the news breaking that Marsh is EACOP’s broker, more than 16,000 people signed onto a petition urging the company to cut ties. Earlier this week, more than 3,500 people took part in a social media action, posting photos of themselves with signs demanding that #MarshDropEACOP. 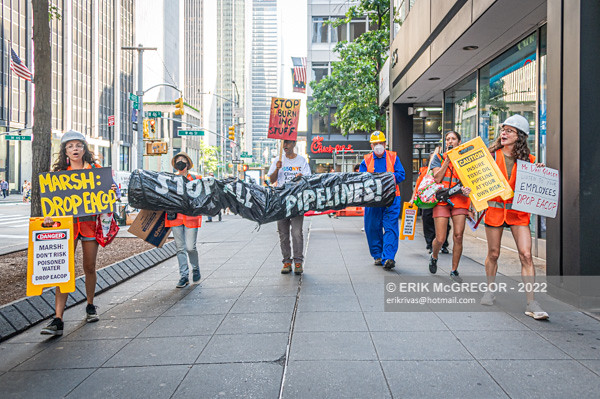