New York, NY – Disabled activists across the state have long been furious with the deadly restrictions imposed on Medicaid-funded home care eligibility since it was proposed by the Medicaid Redesign Team (MRT 2) and included in the final state budget in April 2020.

An especially violent and callous change amid the COVID-19 pandemic, Downstate New York ADAPT is calling for the repeal of the law by demanding immediate action from the state Legislature in the upcoming state Budget. ADAPT members are furious to see that the Governor’s draft budget, as well as the Assembly’s one house budget, has not included the repeal bill (A5367A/S5028A).

A sit-in has been planned by ADAPT members for the week of March 14th to March 18th to fight for the repeal bill to be included in the final budget. TODAY, on Monday March 14th, we will gather at Assemblymember Heastie’s Bronx office (1446 E Gun Hill Rd, Bronx, NY 10469) from 8AM-8PM, which will carry on until Wednesday. Location details for Thursday-Friday will be released.

The stricter rules for home care eligibility, which have yet to go into effect, cut eligibility for home care and personal care services for all but those facing the most significant disabilities, preventing access to lower-cost services that help avoid health deterioration, hospitalization, or other institutional placement. Under the new rules, individuals would become eligible for nursing home care well before they are able to receive home care services. The cuts are the equivalent of telling people they are no longer able to go to the doctor for a cold but must instead wait until it turns into pneumonia before receiving care.

Making the eligibility criteria for home care stricter than that of nursing home placement would upend federal mandates and policies, leaving the State vulnerable to lawsuits and a significant loss of critical federal funds. Advocates contend that implementing these cuts will not only waste money but also worsen the institutional bias in New York State, which encourages nursing home placement above services in home and community-based settings.

Nina Bakoyiannis, co-coordinator of DNY ADAPT, said of the new rules, “These proposals are the definition of penny-wise and pound foolish. They are using draconian cuts to eligibility in a misguided attempt to save money, refusing to recognize that the only way in which these cuts would actually save the state money is that they will result in the early and unnecessary death of thousands of aging and disabled New Yorkers who need them for basic needs like showering, going to the bathroom, and even getting out of bed. We are giving the Senate and the Assembly a clear and swift way to save thousands of lives. If they ignore us, we will remember.”

In response to the home care eligibility changes, members from Downstate New York ADAPT and Capital District ADAPT worked with Assemblymember Richard Gottfried and Senator Gustavo Rivera in late 2020 to draft the bills that would repeal the cuts. 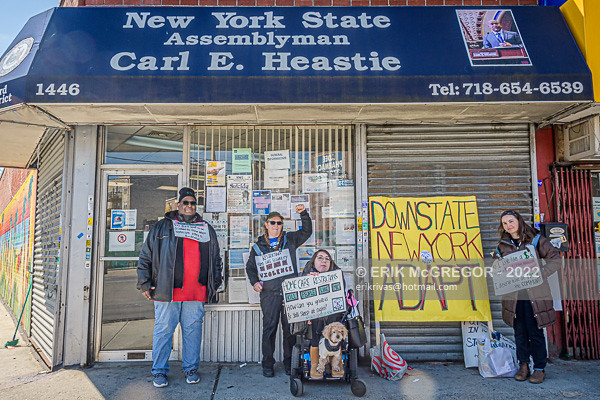