New York, NY – Members of the activist group Rise and Resist organized the first JUST LOOK UP! action on January 24, 2022 outside the New York Governor’s office in midtown Manhattan. Participants held signs shouting JUST LOOK UP! at Governor Hochul’s office on the 38th floor to demand that she fully fund the fight for climate justice in New York State.

JUST LOOK UP! No, not an asteroid, JUST LOOK UP at the 38th floor of 633 Third Avenue to Governor Hochul’s midtown Manhattan office to see a glaring example of of climate denying and climate dawdling.

Hochul’s budget allocates approx. one quarter of ONE percent of the total needed to adequately address our climate crisis. We need $15 billion. The Governor does not seem to understand that a penny saved is a future lost.

In the weeks and months ahead Rise and Resist will be taking our JUST LOOK UP! banner along with messaging to every building in the city containing a climate denier, a climate exploiter, a climate aggravator, a greenwasher, a climate criminal, to plead with everyone to JUST LOOK UP! to see exactly where the climate crisis is being swept under the rug time and again.

Like the activists and scientists in the recent Netflix film crying out to people that the truth of their impending extinction is right there above for them to see with their own eyes, so, too, is Rise and Resist screaming JUST LOOK UP! to see the truth of our climate crisis.
Time is running out. For ALL of us! 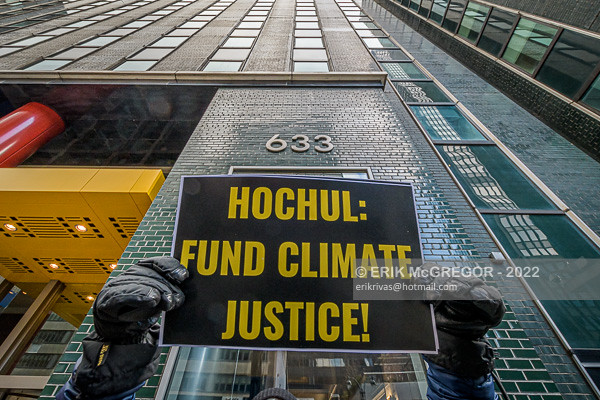