Glover VT – Bread And Puppet presents Our Domestic Resurrection Circus, a brand new show in the tradition of the iconic Bread & Puppet Circuses that began at Goddard College in Plainfield, Vermont in 1970.

As usual, the show draw on traditional circus tropes and familiar Bread and Puppet iconography to draw attention to the urgent issues of the day.

Stilt dancers, paper maché beasts of all sizes and a riotous brass band make a raucous, colorful spectacle of protest and celebration.

“For a second year in a row, we celebrate the 50th anniversary of Our Domestic Resurrection Circus”, says director Peter Schumann.

The show, says Schumann, is “in response to our totally unresurrected capitalist situation, not only the hundreds of thousands of unnecessarily sacrificed pandemic victims but our culture’s unwillingness to recognize Mother Earth’s revolt against our civilization. Since we earthlings do not live up to our earthling obligations, we need resurrection circuses to yell against our own stupidity.”

After the show Bread & Puppet served its famous sourdough rye bread with aioli.

The Bread and Puppet Theater was founded in 1963 by Peter Schumann on New York City’s Lower East Side.

Besides rod-puppet and hand puppet shows for children, the concerns of the first productions were rents, rats, police, and other problems of the neighborhood.

In 1974 Bread and Puppet moved to a farm in Glover in the Northeast Kingdom of Vermont. The 140-year old hay barn was transformed into a museum for veteran puppets. 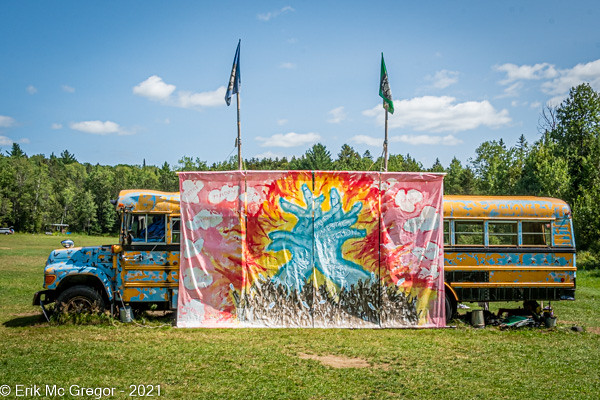