New York, NY – In commemoration of the August 6 and August 9, 1945 bombings of Hiroshima and Nagasaki, New York City-based nuclear disarmament advocates assembled outside the Municipal Building on August 6, 2021 to deliver a letter to Council Speaker Corey Johnson urging him to bring NYC nuclear disarmament legislation, Resolution 976 & Introduction 1621, to the floor for a vote. The site of the gathering is rich with history, because the development of the atomic bombs began across the street from City Hall at the Manhattan Project headquarters, at 270 Broadway.

Beginning in 1954, New York City was ringed by an archipelago of nuclear missile bases armed with 180 warheads. Two were within the City limits at Hart Island and Fort Tilden. Nike Hercules anti-ballistic missiles with warheads of 3, 20 or 30 kilotons (the yield of the Hiroshima bomb was 15 kilotons) were based directly adjacent to the public beaches at Jacob Riis Park.

Knowing that any use of nuclear weapons in an urban area, whether accidental or intentional, would cause unimaginable catastrophic humanitarian, environmental and economic consequences, New Yorkers took action. Bayard Rustin and Langston Hughes were early advocates for nuclear disarmament, linking them to racism and colonialism, from the mining of uranium in Africa and on indigenous lands to the dropping of bombs on Japan and the testing of thermo-nuclear weapons on the people of the Marshall Islands and Bikini Atoll. Walter Naegle, Bayard Rustin’s partner, said in testimony to the City Council, “In the late 1950s he was arrested not far from these chambers when he refused to take shelter during an air raid drill. Joining Dorothy Day and other peace activists, he remained in City Hall Park during a time of mandatory evacuation to underground shelters. Were he with us today, I know he would be here urging the NY City Council to move forward on these initiatives.“

Day wrote, “We live in the richest country in the world. We could supply food to feed the entire world…[but] We have, at the same time…our foreign policy, of proliferating nuclear armaments, ever increasing the horror of another holocaust. I would say these are the things we must remember and do penance about.”

On June 12, 1982 the Rally Against the Arms Race drew approximately 1.2 million people to Central Park to protest nuclear weapons, according to lead organizer Leslie Cagan. The next year, Council Speaker Carol Bellamy, led the City Council in passing a resolution declaring New York City a Nuclear Weapons Free Zone. David Dinkins, as City Clerk in 1985, in response to a petition of more than 100,000 signatures worked with members of New York City’s Board of Elections on a referendum to amend the City Charter “to restrict the power of the Board of Estimate to approve the use of city property or moneys for any military facility which is designed to carry or maintain nuclear weapons.”Since then, all nuclear weapons bases within NYC have been decommissioned, and the Navy reportedly avoids bringing nuclear-armed and/or -powered ships into the Harbor.

Resolution 976 calls on the Comptroller to instruct pension funds to divest from companies involved in the production of nuclear weapons. New York City’s approximately $500 million dollars in investments in nuclear weapons need be shifted to more ethical and fiduciarily responsible investments, including the production of green technologies to address the climate crisis through a Green New Deal.

Resolution 976 also re-affirms New York City as a Nuclear Weapons Free Zone in an effort to prevent nuclear weapons from being again placed within the territorial limits of the City of New York and joins NYC to the ICAN Cities Appeal, which and calls on the U.S. to join the landmark Treaty on the Prohibition of Nuclear Weapons (TPNW). The TPNW, adopted by 122 countries in 2017, makes nuclear weapons comprehensively illegal and became international law on on January 22, 2021.

Introduction 1621 establishes a Nuclear Disarmament and Nuclear Weapons Free Zone Advisory Committee to advise the City Council on environmental remediation policy for legacy sites within the five boroughs. In the race to produce the world’s first nuclear weapons, the Manhattan Project handled radioactive material at 16 sites within New York City. This included 1,200 tons of uranium ore in Port Richmond, Staten Island, 3.7 tons of thorium oxalate in Ridgewood, Queens and 150 tons of uranium materials at the Baker and Williams Warehouses in Chelsea. It will also conduct a comprehensive review of New York City’s current stance on nuclear weapons; submit an annual report for five years including recommendations for policy and legislation; and host discussions, public programs and other educational initiatives.

Robert Croonquist, retired NYC public school teacher, gay activist and pensioner, “Speaker Johnson, it is up to you and you alone to realign New York City’s priorities to our progressive values, both fiscally and morally. I spent my career teaching the youth of New York City how to create a better world. My pension must not be invested in their destruction. NYC can send a powerful message to the world that we prioritize human needs over nuclear violence.” 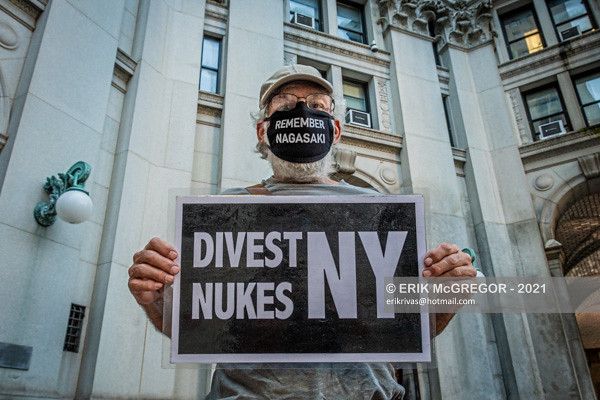