Leaders of the Poor People’s Campaign and their allies also engaged in nonviolent direct action at Senate offices across the nation.

These actions are part of a “Season of Nonviolent Direct Action,” a coordinated campaign of nonviolent moral actions aimed at abolishing the filibuster, protecting voting rights and establishing a $15 minimum wage.

Understanding the urgency of the hour and the peril facing our voting rights and ultimately our democracy, Rev. Theoharis joined faith leaders and others in non-violent moral direct action in front of 780 Third Avenue as Congress has yet to meet our demands.

The Poor People’s Campaign: A National Call for Moral Revival, joined by dozens of partners, our 40+ state coordinating committees, and thousands of faith leaders, has announced a season of non-violent moral direct-action July 12 – August 8, 2021.

We demand that Congress:

Now is the time to ask our representatives and ourselves: WHICH SIDE ARE YOU ON? DEMOCRACY or AUTOCRACY? 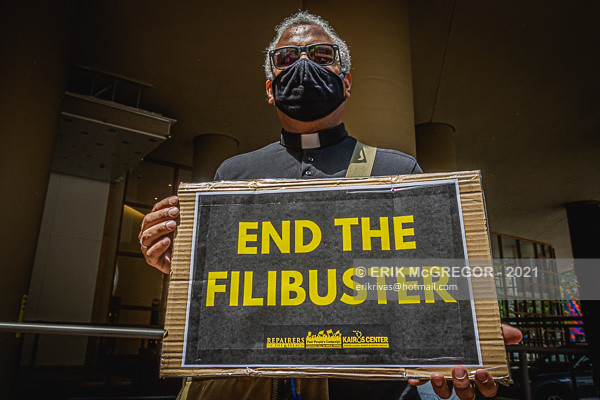