New York,NY – Members of the activist group Rise And Resist and other New York-based grassroots organizations gathered at the steps of the New York Public Library on June 10, 2021 holding banners and signs to demand that Senator Schumer and the elected Democrats in the senate vote to end the filibuster.

WHAT IS THE FILIBUSTER? The filibuster is a Senate rule that allows the minority party to block legislation by requiring 60 votes to close debate and move a bill to a final vote, where it could pass with only 51 votes, or a “simple majority.”

Originally, senators had to speak continuously without even a bathroom break. But now just the threat of a filibuster shuts a bill down.

The Filibuster is a racist relic of the Jim Crow South. Racist conservatives historically used the filibuster to deny civil rights to African Americans. Because of the filibuster, anti‐lynching legislation didn’t pass until 2018.

The Filibuster is undemocratic and dangerous. The filibuster was created in the early 1800s, but was rarely used. Now, Republicans have weaponized the filibuster and use it to shut down every progressive bill. Mitch McConnell declared that “100% of my focus is standing up to [Biden’s] administration.”

The Senate has a once-in-a-generation opportunity to enact bold reform on urgent issues we care about. We must tell them: KILL THE FILIBUSTER! 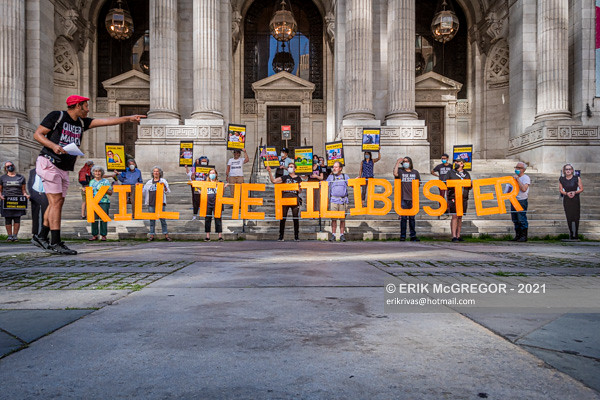