Demonstrations in Cities Across U.S. and Europe Push BlackRock to Use Its Shareholder Power for Climate Action

New York, NY – Climate activists with Stop the Money Pipeline held a rally in midtown Manhattan on April 17, 2021 first at BlackRock’s HQ and then march to JP Morgan Chase’ HQ to protest two of the world’s biggest funders of climate destruction in their opinion- to urge the two companies to end their support for the dangerous proposed Line 3 pipeline project, and stop funding fossil fuels and forest destruction.

For the past three days, climate activists have held “All Eyes on BlackRock” demonstrations in cities across the United States and Europe to hold financial giant BlackRock accountable to its commitments to tackle climate change and push it to take voting action this shareholder season. In seven major cities, activists gathered outside BlackRock offices with banners, signs, props, and projections.

Actions took place in New York, San Francisco, Boston, Miami, Dallas, London, and Zurich, as corporations around the world prepare for this year’s annual general meeting (AGM) season. Giant eyeballs were placed at BlackRock’s headquarters in New York City with the messages “All Eyes on BlackRock” and “BlackRock Vote Climate Now”. These events were coordinated with the BlackRock’s Big Problem campaign.

As the world’s largest asset manager, BlackRock is a major shareholder in almost every publicly traded company. As such, it has huge power and influence in major corporations – including major polluters and their funders. That influence can make or break climate action. Activists are calling on BlackRock to use this power to fight climate change by voting out boards of directors at companies not acting fast enough on climate, and voting for shareholder resolutions that are critical for curbing the climate crisis.

Activists are watching key votes that BlackRock will take at this spring’s annual general meetings (AGMs) of corporations including ExxonMobil, BP, WellsFargo, and Barclay’s, among others. BlackRock has previously said it ‘may’ vote against management at companies not acting fast enough to tackle climate change. This AGM season will be a crucial test to see how far that commitment goes.

“CEO Larry Fink talks a big game on climate, but the company is the top investor in oil, gas and coal,” said Patrick Houston of New York Communities for Change. “As the season of shareholder annual meetings looms, all eyes are on BlackRock.”

“My heritage is of a people whose rights were violently violated. My future is of a planet whose climate is being devastatingly altered. BlackRock should wield its vast financial power to mitigate the climate crisis,” said Xiye Bastida, a 19 year old Climate Justice Activist of the Otomi-Toltec nation. “It can start by divesting from Enbridge, the owner of the Line 3 pipeline, before moving to divest from all tar sands.” 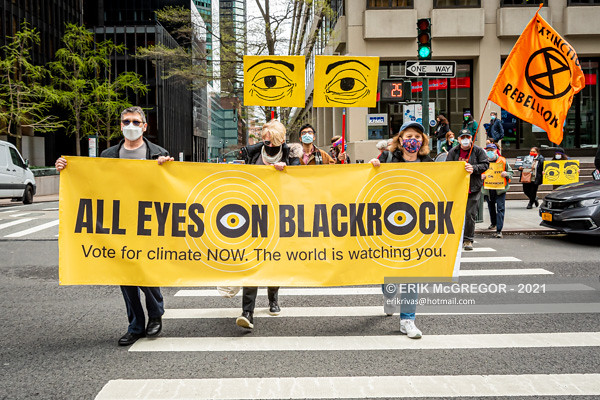