New York, NY – In the face of worsening pandemic conditions in the country, a coalition of Activists gathered outside the New York Stock Exchange at Wall Street on January 28, 2021 to call for the Equitable Taxation of Corporations, demanding legislators to pass the Financial Transaction Tax to generate around 9 billion dollars needed for COVID Recovery, and Essential Services.

Activists marched from the New York Stock Exchange to the iconic Charging Bull statue to draw attention to the Invest In Our New York Act, a six-bill package of revenue-raising legislation that includes a Financial Transaction Tax.

The goal is to raise public awareness of the possibilities in the bold package and to demonstrate to Albany legislators that they have strong and spirited support as they guide the bills to passage. A further goal is to put the governor on notice that his continued protection of wealthy donors by refusing to raise their taxes when so many New Yorkers are in desperate straits is not acceptable.

New York was grappling with significant fiscal problems long before the COVID virus arrived. Austerity-driven policies had caused cuts to education funding, hospital closures, and a harmful shifting of expenses onto county and local governments.

The pandemic has worsened the problem and also cast into high relief New York’s long-standing systemic inequalities. Small businesses are closing. Children’s education is faltering online. Arts and culture are languishing. While the state faces a projected $60B deficit over the next four years, many New Yorkers are becoming wildly, unimaginably rich. New York is the 10th largest economy in the world, larger than Canada, larger than Russia. It’s not lack of money that’s the problem – it’s the inequity that’s killing us. New York is third in the nation in economic inequality, a disparity that endangers us all.

New York needs an adequate, steady revenue stream. State legislators, economists, advocacy and grassroots groups, and nine out of ten New Yorkers have all come to the same conclusion about how to achieve that. WE MUST TAX THE RICH. It’s the most effective, fair and, yes, moral way out of the current fiscal hole and toward a future where all New Yorkers can thrive.

“Over the past year Wall St Banks and traders have broken record after record pilling up trillions in profits, while the real economy and those who live in it have seen record unemployment, homelessness, and suffering. This devastating dynamic is a testament to the failure of our tax code to support New Yorkers in need. It’s time for our public officials to get to work and ensure we invest in our New York. It’s time to tax the rich.” Says Charles Khan, Organizing Director at Strong Economy for All.

The Invest In Our New York Coalition Act is a package of bold revenue-raising legislation slated for inclusion in this year’s NYS budget. The package of six bills will yield $50 – $75B every year by taxing only corporations and the very wealthy. One of the bills, the Financial Transfer Tax, targets Wall Street where business has boomed during the pandemic. It would levy a tax on trades of stocks and other financial instruments at a rate from 0.005% to 0.5% depending on the instrument being traded.

This is not a new idea. Financial centers like London and Hong Kong already tax stock transactions. Until the 1980s, New York did too. Nor is the burden onerous, considering that New Yorkers pay an 8.875% tax when buying a pastrami sandwich at Katz’s Delicatessen or plywood from Home Depot. The tax bite per transaction is minuscule – half a percent on a $1,500 share of Chipotle – but with Wall Street sales in excess of $30T a year, the revenue raised would be significant: $12 – $29B annually. This money is needed right now for Covid recovery and will be needed every year in the future if we are to have a state where all New Yorkers can thrive.

Across the state, New Yorkers are calling upon their Senators and Assembly members to use the super-power of their super-majorities to raise the revenue that New York so desperately needs. Governor Cuomo must end his reign of austerity if New York is to be a state where we all can prosper. 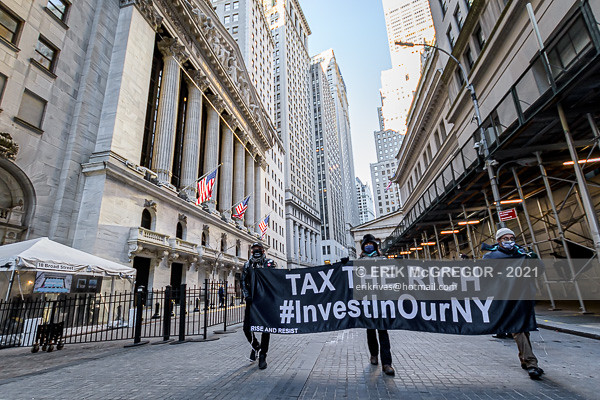