New York, NY – Activists from New York-based direct action group Rise and Resist and the International Campaign to Abolish Nuclear Weapons (ICAN) took to the streets to announce the entry into force of the Treaty on the Prohibition of Nuclear Weapons on January 22, 2021 by holding illuminated letters that read #NUCLEARBAN in front of iconic New York landscapes.

Activists also were seen holding letters spelling #InvokeThe25th in support of calls to remove Trump from power by impeachment or by invoking the 25th amendment.

January 22 will be an historic day for nuclear weapons abolition. That day will establish in international law a categorical ban of nuclear weapons seventy-five years after their development and first use. The momentous occasion will be marked by actions, events, and celebrations around the globe and across the United States.

It has never been more urgent to eliminate nuclear weapons than now, as the world watched in horror, on January 6, 2021, the storming of the Capital Building in Washington DC, the seat of US democracy. On January 8, Speaker of the House Nancy Pelosi spoke with the chairman of the Joint Chiefs of Staff, Gen. Mark Milley, about “available precautions for preventing an unstable president from initiating military hostilities or accessing the launch codes and ordering a nuclear strike.”

“The situation of this unhinged President,” Pelosi wrote, “could not be more dangerous and we must do everything that we can to protect the American people from his unbalanced assault on our country and our democracy.” She later told her caucus she had received assurances that there were safeguards in place, according to a source on the call. It is unclear what those safeguards might be.

“Right now, the Treaty does not legally bind the United States,” said Dr. Kathleen Sullivan, Director of Hibakusha Stories, an initiative that has brought first hand testimony of A-bomb survivors to approximately 40,000 New York City high school and university students. “The U.S. has not yet signed or ratified the Treaty.

Still, the moral force of the Treaty on the Prohibition of Nuclear Weapons will be felt across the globe. All nuclear weapons, including the 5,800 warheads in the US stockpile, have been declared unlawful by the vast majority of international community. This is an extraordinarily important milestone to be celebrated by all who cherish life on earth, because every moment of every day, nuclear weapons threaten everyone we love and everything we hold dear.”

This action in New York City is just one of many events happening around the city, the country and the world. A coalition of NYC peace groups, spearheaded by The Manhattan Project for a Nuclear Free World and New York Peace Action, will be delivering. Thank You messages and yellow roses to the missions of the 51 countries who have, as of this date, ratified the treaty. At nuclear weapons production sites in Tennessee, Kansas City, New Mexico and California, banners declaring NUCLEAR WEAPONS ARE ILLEGAL will be hung on fences at the plant entrance. Letters will be delivered to members of Congress. Churches will ring their bells.

“The entry into force of the Treaty is a turning point, especially now as the insurrection in Washington has focused the world’s attention on the perils of nuclear armed states and those who govern them,” said New York resident Mitchie Takeuchi, second-generation atomic bomb survivor and granddaughter of Dr. Ken Takeuchi, the Director of the Hiroshima Red Cross Hospital who oversaw the recovery efforts after the bomb destroyed his city on August 6, 1945. “This is just the beginning of a new movement to confront nuclear armed states and demand that they lift the dark shadow of nuclear annihilation that has loomed over the world for the last seventy-five years.” 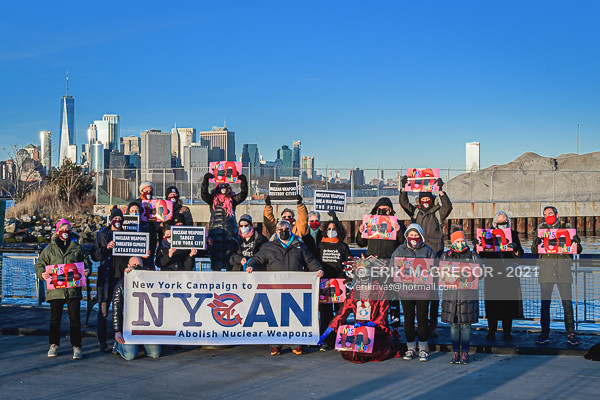