Brownsville, NY – Residents from Brownsville, Brooklyn, disrupted National Grid’s construction site on December 10, 2020 at the intersection of Junius St. and Linden Boulevard halting their so-called Metropolitan Reliability Infrastructure Project, better known as the North Brooklyn Pipeline, successfully shutting it down for the day.

National Grid has raced to complete construction of the widely-opposed fracked gas pipeline even as the community demands to stop have increasingly been joined by elected officials, including that of Mayor Bill De Blasio, who declared the pipeline “unnecessary…because we cannot justify the environmental impacts on the largely Black and Brown residents of Brooklyn” last week.

Gabriel Jamison, a Brownsville native and community organizer with Brownsville Residents Green Committee, said “We took this action to protect the people who have already endured enough, our neighbors and especially the children of Brownsville who will bear the biggest burden through health risks as well as environmental degradation. As we continue to let corporations invest our money into fossil fuels, Brooklyn will face more intense storms and flooding. Asthma and cancer rates can rise from being exposed to the dangerous substances in these pipes.”

Opposition to the pipeline in Brownsville has been led by the Brownsville Residents Green Committee (BRGC) and has been growing in the community since residents found out about the project this summer when National Grid returned to the area to complete a sewer crossing at the south end of the pipeline. Brownsville has some of the worst air quality in New York City and the highest rates of asthma.

Brownsville residents say the pipeline would continue a history of racial, economic and environmental injustice in the community and are demanding that construction be halted permanently, that fracked gas never flow through the pipeline and for Governor Cuomo and the Public Service Commission (PSC) to reject National Grid’s proposed rate hike to pay for it.

In response to the Mayor’s announcement, National Grid claims they put pipeline construction on hold in November but construction has continued, mostly at night, in Brownsville. It appears the company has stopped construction on phase 5 of the pipeline which would be built through Greenpoint.

“We did this action to protect the frontline community where this pipeline begins and to call attention to the construction still happening here despite the mayor’s recent statement. National Grid’s claims about who this pipeline will serve have been disproven. The fact is that corporate executives stand to personally make millions of dollars for increasing company profits, while this pipeline would cause major health risks and cost money for working class people fighting to survive. Profits are clearly prioritized over people. This is unacceptable, especially during a pandemic,” said Anna Tsomo, a Brownsville Residents Green Committee leader and public health student.

Brownsville community members say they were never consulted about the pipeline and most would have never known that the construction they were seeing was a fracked gas pipeline if they had not learned about it from anti-fracked gas infrastructure advocates. National Grid presented to Brooklyn Community Board 1 in January a few months after construction began in that area of Northern Brooklyn, but canceled last minute on presenting to CB-16 in Brownsville citing the ongoing rate case litigation which was also happening in January.

Governor Cuomo and the PSC have let construction of the pipeline continue while National Grid’s downstate rate case drags on in confidential settlement negotiations that could determine if the utility gets rate recovery approval for the pipeline which will put Brooklyn ratepayers on the hook for the $100 million worth of construction National Grid has completed in 2020 despite community opposition. 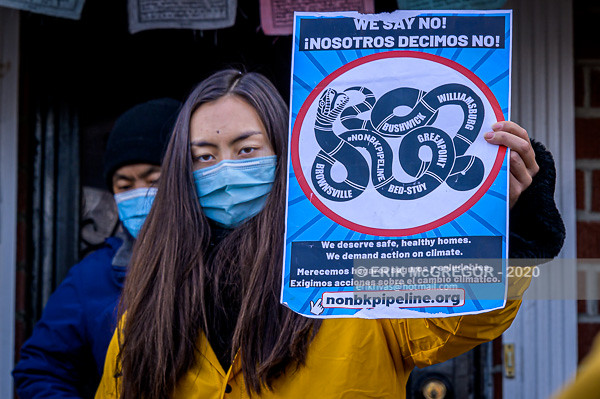