NEW YORK, NY – On World AIDS Day, December 1, 2020 the End AIDS New York Community Coalition gathered outside Governor Cuomo’s offices in Manhattan, to convene at a rally and press conference, demanding Governor Cuomo to make good on his commitment to end AIDS as an epidemic in New York State, in a full and equitable manner that eliminates persistent HIV health disparities based on race, poverty, and marginalized identities.

Despite years of collaborative government and community effort that has produced significant overall progress, the Governor now appears to be abandoning his 2014 commitment to Ending the Epidemic—by stripping away essential resources that are key to sustaining progress and reaching our EtE goals. In the midst of a pandemic that disproportionately affects the same communities of Black and Latinx/Hispanic New Yorkers who also experience HIV health disparities, the State has imposed a 20% across the board withhold of funding for critical HIV prevention and care programs, and has plans to undermine the fiscal stability of and services provided by the safety-net providers that care for the State’s most vulnerable populations living with or vulnerable to HIV/AIDS.

In June 2014, Gov. Cuomo announced a historic commitment to end AIDS as an epidemic in NYS by 2020, and appointed a 64-member Task Force to develop a Blueprint to meet this goal. The Governor formally accepted the Blueprint in April, 2015, endorsing and calling for full implementation of each of its recommendations. Since that time, the End AIDS NY Community Coalition, ETE Task Force members, the AAC, and others have worked with the Governor’s Office, the NYS Legislature, and the New York City Mayor and City Council to implement major elements of the plan.

Despite repeated promises to fully implement the Blueprint, Governor Cuomo has refused to date to fulfill key Ending the HIV/AIDS Epidemic (ETE) Blueprint recommendations that are essential to address health disparities. These Blueprint recommendations (BPRs) include efforts to improve housing for people living with HIV/AIDS (PWHA) outside of NYC (BPR #’s 8,9 &16), expand overdose prevention efforts (including overdose prevention centers) to address the opioid crisis and prevent new HIV and Hepatitis C (HCV) infections (BPR #15 and Getting to Zero recommendation #3), and to eliminate HIV/HCV co-infection by identifying and treating HCV among PWHA (BPR #26).

The State’s 20% withhold of funding for HIV prevention and care services is undermining evidence-based work on EtE recommendations that have been implemented, threatening to undo our EtE progress to date. These cuts are compounding the already serious barriers to effective HIV prevention and care created by the COVID-19 pandemic—barriers acknowledged by the Governor and Department of Health, but not addressed—including a statewide shortage of syringes and other harm reduction supplies and decreased access to HIV testing and care, leading to new HIV infections such as a cluster of new HIV cases in Monroe County.

Most harmful is the current plan by the NYS Department of Health (DOH) to strip away millions of dollars in “340B” savings that provide fundamental fiscal support for the community health centers and Ryan White HIV clinics that deliver HIV prevention and care to medically underserved communities and populations. NYS safety net providers use 340B savings to increase health care capacity, and to fund otherwise uncompensated or underfunded “wrap-around” comprehensive patient care services recommended in the EtE Blueprint as essential in order to address long-standing inequities in HIV prevention and care. 340B funded services have increased access to PrEP, and enabled people with HIV to achieve and maintain the HIV viral suppression key to ending our NYS HIV epidemic by sustaining the health of PWHA and stopping new infections.

The planned DOH pharmacy “carve-out” plan will strip away over $56M in pharmacy rebates from just 15 of the hundreds of AIDS health care, prevention and service safety net providers across the State; all of whom will be deeply affected. Without these funds, many Ending the Epidemic interventions will have to be terminated, and New York State will see major service reductions and dozens of clinic closures in neighborhoods with the highest levels of poor HIV health outcomes.

This World AIDS Day, leaders from across New York State demand that Governor Cuomo take immediate action to keep his promise on Ending the HIV/AIDS Epidemic and to cease the Department of Health’s attack on the safety net, which is so vital to the health and survival of people living with and affected by HIV. 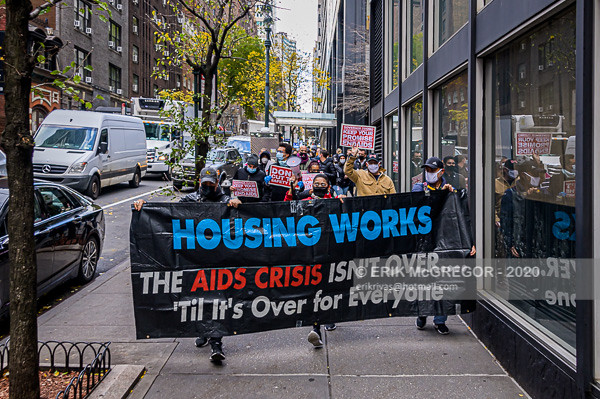