CALL FOR CITY COUNCIL TO PASS RES. 976 & INT 1621, NUCLEAR DISARMAMENT LEGISLATION ON THE 75TH ANNIVERSARY OF THE ATOMIC BOMBINGS OF HIROSHIMA AND NAGASAKI

New York, NY – Members of the New York Campaign to Abolish Nuclear weapons (NYCAN) gathered outside the David N. Dinkins Municipal Building in Manhattan on the 75th anniversary of the bombing of the city of Hiroshima, to give notice to the New York City Council that it is time to bring Resolution 976 and INT 1621, known as the Nuclear Disarmament Legislation to the floor for a vote at the next Stated Meeting.

On February 28, 2019, over 60 citizens testified at New York City Council in support of two pieces of nuclear disarmament legislation introduced by Council Members Daniel Dromm, Helen Rosenthal and Ben Kallos. Well over 100 people submitted 414 pages of evidence in support of the legislation.

The legislation was ready to go to the floor for a vote on March 26, 2020, when the city and the world was overwhelmed by the COVID-19 pandemic. Chief sponsor Danny Dromm’s district of Elmhurst, Queens, became the global center of the pandemic. Subsequently the death of George Floyd at the hands of the Minneapolis police sparked a national reckoning on police violence and the militarization of daily life throughout the United States and here New York City.

Resolution 976 and Introduction 1621, both of which have a veto-proof super majority of co-sponsors, were set aside as City Council’s attention urgently addressed the suffering of New Yorkers, 22,970 whom we lost to date to the pandemic and many thousands more who in our city suffer daily from systemic racism and police brutality.

Now, more than ever it is time to re-direct the Council’s attention and bring Council Member Dromm’s nuclear disarmament legislation to the floor for a vote. Because NYC played a fundamental role in the Manhattan Project we therefore have a special responsibility to ensure that nuclear weapons are never used again.

Therefore, on this day that commemorates the 75th year since the United States used the first nuclear weapons ever developed, utterly destroying the cities of Hiroshima and Nagasaki, we call upon City Council to honor the victims and survivors of those bombings and to honor the moral courage of generations of New Yorkers who have worked to abolish nuclear weapons. 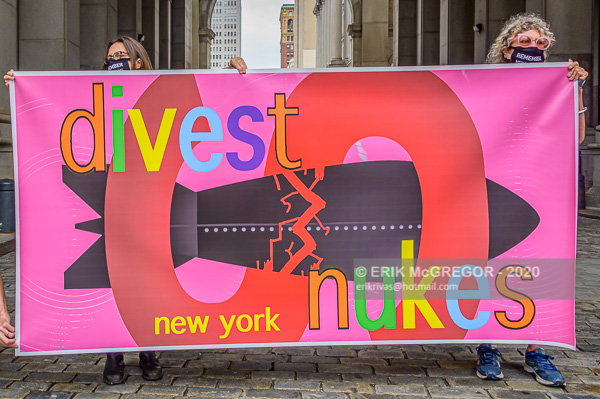