New York, NY – The Indigenous Peoples Day NYC Committee (IPDNYC), a coalition of 13 Indigenous Peoples and indigenous-led organizations gathered outside the Canadian Consulate and Permanent Mission to the United Nations on February 18, 2020 to support the Wet’suwet’en Nation in their opposition to a Coastal GasLink pipeline scheduled to enter their traditional territory in British Columbia, Canada.

The IPDNYC Committee presented a letter of support to a representative of the mission to be directed to Prime Minister Justin Trudeau. The IPDNYC Committee letter calls for the removal of the militarized RCMP from the territory and dialogue that includes the traditional Wet’suwet’en hereditary chiefs who presented alternate routes to for the pipeline, which were ignored.

A number of land defenders have been arrested on the territory and reports reveal a heavily militarized RCMP presence including snipers. A number of arrests have been made and solidarity support actions with the Wet’suwet’en are now taking place across Canada, including the blockades of railroads.

Two main reasons for their opposition are:
1) the pipeline is expected to be built through the Wet’suwet’en Nation’s territory without consent.
2) the environmental impacts, such as the pollution of water.

The Canadian government is infringing on the rights of Wet’suwet’en relations defending their yintah (land) against the desecration of their territories in so-called B.C.

The government is prioritizing profit over people, greenlighting a gas pipeline that would cut through the heart of Wet’suwet’en territory, sacred and burial sites, and cultural healing centers that have already begun to be dismantled.

We’ll be rising in solidarity with Indigenous supporters, organizations in the city taking action to support, allies, accomplices, and relatives to send a clear message to the Canadian Government:

We’re rising with the Wet’suwet’en. We will do everything in our power to ensure their rights. We will cut the head off the Coastal GasLink black snake.

This protest was organized in solidarity with a similar protest held on the Canadian side of the Rainbow Bridge. Some members of the indigenous community gathered on the Rainbow Bridge beating a drum and signing in their native language. 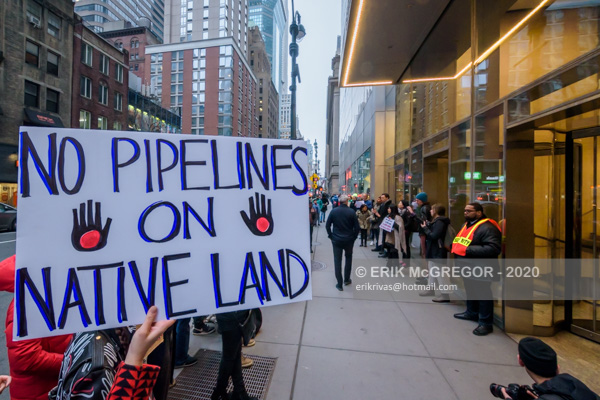