Not My President Sing A-long! (songs in the key of F*YOU) · Hosted by Sing Out, Louise at Washington Square Park

New York, NY – New York activist choir Sing Out, Louise hosted the Not My President Sing A-long! (songs in the key of F*YOU) on February 17, 2020 a pop-up street performance under the arch at Washington Square Park.

Outraged? Disgusted? Pissed? FURIOUS? DUMBFOUNDED? All of the above and more at this joke that calls himself president?! Yeah, us too. He’s NOT OUR PRESIDENT and we’ll be out singing out about it on President’s Day. Come join us and make some noise. It’s better than shouting at the TV.

Sing Out, Louise! (songs in the key of F*YOU) – In October 2017, some members of Gays Against Guns began writing Christmas carols about gun violence for an action called GAG Nog. We’d written about a dozen songs when the unthinkable happened—Trump was elected. We quickly turned our brains to music that captured our mood, and survived that very bleak December belting “Donny the Con Man” at Christmas markets around New York.

After the holidays, GAG Nog morphed into GAG Reflex, a full-fledged Resistance Queertet. When GAG joined the Women’s March the day after the inauguration, we were there, leading hundreds of folks in “Battle Him for the Republic,” “He’s a Nasty Neonazi,” and other patriotic songs.

Friends from Rise and Resist joined us for a series of marches and actions throughout the spring and summer, and soon we’d amassed what we call our hymnal: An always-evolving collection of irreverent, in-your-face songs “in the key of F you.”​

Mark Thompson heard us at one summer march, and before we knew it we were on Sirius XM’s Make It Plain. By the fall of 2017, we decided it to spin off from GAG. The Reflex became Sing Out, Louise! That may seem odd as a resistance credo, a line from a Broadway show, but to us it resonates: Get out there—make your voice heard! And that’s what we’re all about.

We aren’t necessarily pretty, and we’re never polite. We don’t care if you can’t sing a note—we want you to take the hymnal and sing along. We are reclaiming our time and having a blast doing it. 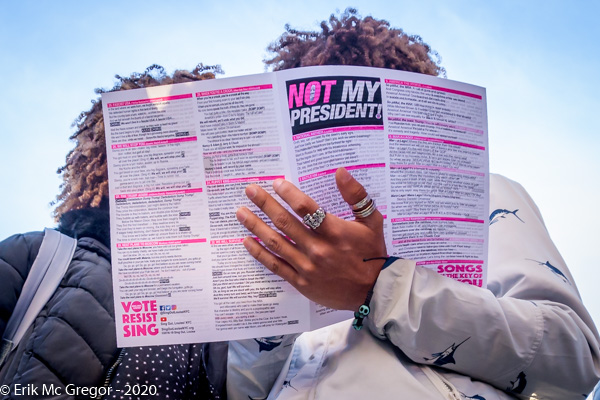