New York, NY – The auction of a South Philadelphia refinery in Manhattan prompted a regional protest of fossil fuels as Philadelphia activists, New York activists, faith leaders, seniors and youth stormed the lobby of Kirkland & Ellis LLP offices in Manhattan on January 17, 2020 with a creative disruption using banners, signs and a die-in to express public opposition to the refinery reopening.

Last summer the Philadelphia Energy Solutions (PES) oil refinery massively exploded in South Philadelphia, leading the 150-year-old refinery to shutter. Over 1,000 workers were laid off and the company entered into bankruptcy proceedings for the second time in two years.

Local environmental justice organization Philly Thrive– active on the refinery issue since 2015– organized over fifty Philadelphians to travel to the auction as part of a slate of protests leading up to the decision about the site’s future.

Philly Thrive also put out a call to environmental organizations in New York City to join the protest of the auction, seeing it as an opportunity to express cross-state opposition to a regional polluter. Twelve New York City organizations have signed on to the action, including 350NYC, People’s Climate Movement-NYC, Sane Energy Project, and others.

The private auction taking place today at Kirkland & Ellis LLP at 601 Lexington Ave. in Manhattan is a significant step in determining the facility’s future at an uncertain time for refineries nationwide.

Public opposition to the refinery reopening has surfaced over the past seven months- most prominently after federal investigations into the explosion were released and breaking news from NBC on January 16th found PES among U.S. refineries leaking deadly chemicals into densely populated areas.

Last Friday, on the final bid deadline for the refinery, four activists were arrested for trespassing on the property as part of a larger demonstration seeking to deter companies intending to operate polluting industry.

“I knew right away when I heard the auction was in New York that had to go,” says Carol White, a Philly Thrive member who lives a quarter mile from PES. “You want to make decisions about our health and our community in another city? My eyes haven’t stopped bothering me since the explosion- my asthma has been terrible- so I can’t stay home and let them decide what happens to me next.”

“I’m only 14 years old and have already lived through Superstorm Sandy, and have seen my family in Puerto Rico suffer from Hurricane Maria,” says Marisol Rivera of New York Communities for Change. “This pattern of big corporations getting their way, while me and my generation pay the costs is unfair and has got to stop– whether here in New York, in Philadelphia, or anywhere else.”

“The fight for the future of this refinery is the fight for the Green New Deal,” says Nicole Karsch, volunteer with Sunrise NYC, another sponsoring organization. “If we are going to transition off of fossil fuels in the next ten years, there will be a lot of refineries like this one closing. We joined this action because we know it’s possible to create jobs that protect our health and our communities.”

The majority of Philadelphians coming for the protest boarded a charter bus at 6:30am leaving from a grocery store near the PES refinery. New York activists met the travelers- almost all for the first time- at St. Bartholomew’s Church, three blocks from the auction where they started the demonstration. The auction was set to start at 11am. 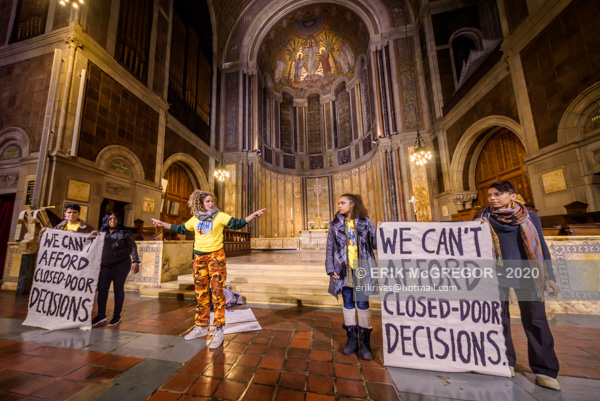