New Yorkers chanted, sang, and shouted at the Commissioners holding signs saying “Public Service Commission Creating More Emissions” and “A Rate Hike is a methane spike,” based on the climate science showing that methane, the main component in fracked gas is 86-101 times more potent than CO2 over a 20 year cycle.

Joining the enraged Con Ed ratepayers from New York City and Westchester today, were Dutchess County residents and business owners who are faced with a detrimental project in their backyard called the Cricket Valley Energy Center (CVEC), which is a highly polluting fracked gas power plant slated for the Con Edison electricity market. Although CVEC was not part of this morning’s approved rate case, they were there to connect the dots that soon, if the plant is not stopped, more of the electricity Con Ed delivers will be fracked gas power.

Following the PSC meeting New Yorkers held a brief sit-in protest at the Hall of Governors to highlight Governor Cuomo’s complicity in the approval of fracked gas infrastructure and failure of climate leadership to get New York off gas in a time frame climate science and now State climate law demands.

“It is harrowing to see how the process failed New Yorkers today,” said Benjamin Schwartz, co-owner of White Pine Community Farm in Dutchess Co. just near CVEC. “The PSC did nothing but open the door for corporations to poison water, air, and land, that are pinnacle for the success of my farm that serves fresh food and medicine to fellow New Yorkers across the region. What we saw is a failure in our government today that will shoe in any polluter for the right price. The expansion of fracked gas in New York goes against everything New York claims to stand for.”

“Governor Cuomo’s administration is starting off 2020 by ignoring the CLCPA and supporting climate denialism,” said Lee Ziesche, Sane Energy Project Community Engagement Coordinator. “We have just ten years left to dramatically reduce greenhouse gas emissions and Con Ed’s plan spends the next three years and hundreds of millions of our rate payer dollars going in the wrong direction. Cuomo and Mayor DeBlasio cannot call themselves climate leaders and raise our bills for fracked gas pipelines at the same time.”

New York City residents, who will see their bills skyrocket in the coming months, feel they never had a voice in this process. Leah Vanessa Bachar, a NYC resident and Con Ed customer said, “How can this possibly happen with no public input? They say they held public hearings, but we never hear about them. Why didn’t they send us notifications in our monthly bills? They certainly have an easy way to contact us if they want our money, but they don’t contact us if they have something to hide, like a rate hike or more poisonous fossil fuels.”

“Governor Cuomo claims to be a climate leader while betraying the public behind closed doors allowing Con Edison and other investor owned utilities to use ratepayer money to expand fracked gas infrastructure,” said Amber Ruther of the NYC Democratic Socialists of America. “Cuomo’s climate failure extends to his Public Service Commission whose first ruling after the passage of the Climate Leadership and Community Protection Act directly contradicts its climate goals. If we plan to address the climate crisis with the urgency the science demands, the age of investor owned utilities must come to an end.” 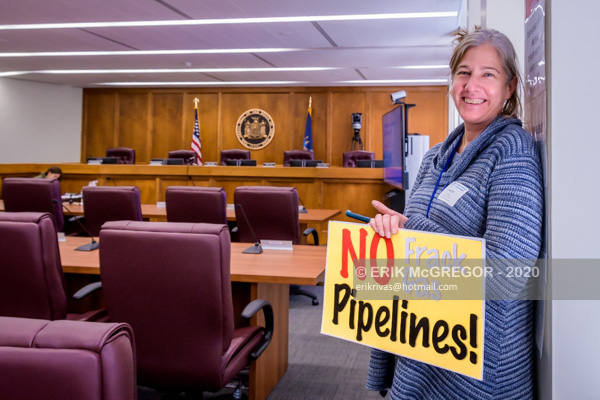