Washington, DC – 133 protesters were arrested blocking the street across the Supreme Court in an act of non violent civil disobedience, as hundreds of LGBTQ+ advocates from Housing Works, the nation’s largest community based HIV/AIDS organization, along with its allies, convened in Washington, DC on October 8, 2019 for a national action with civil disobedience.

The action is a community response to landmark Supreme Court hearings on the same day that could legalize workplace discrimination, primarily against LGBTQ+ people, on the basis of sexual orientation, gender identity, and gender presentation.

“We already live in a world where people who don’t fit societal conventions of gender expression are subject to stigma, discrimination, verbal and physical abuse, and even being killed for who they are,” said Charles King, Co-founder and CEO of Housing Works. “This is compounded for our transgender, non-binary and gender nonconforming brothers, sisters, and siblings. We are mobilizing this action because we are deeply concerned and angered that the gates could be opened to losing rights and protections in the workplace, in education, healthcare, the military, and beyond.”

On October 8, 2019 the Supreme Court of the United States will hear oral arguments in three cases to determine whether LGBTQ+ people are protected from workplace discrimination by Title VII of the 1964 Civil Rights Act, which prohibits employment discrimination based on race, color, religion, sex, and national origin.

The Court will ultimately decide whether the definition of “sex” in Title VII includes sexual orientation and/or gender identity – despite numerous legal precedents supporting that it does.

“This is a potentially catastrophic development,” said Armen Merjian, Senior Staff Attorney for Housing Works. “If Title VII is found not to include sexual orientation or gender identity, it will be perfectly legal under federal law to discriminate against and even fire members of the LGBTQ community on those grounds. Such a conclusion requires an antediluvian and myopic understanding of discrimination based upon ‘sex’ and would return our country to the dark ages of bigotry and exclusion.”

The three cases being heard are:
● Zarda v. Altitude Express, about a late skydiving instructor who was fired for being gay
● Bostock v. Clayton County, which concerns a municipal worker who faced antigay discrimination while working in city government
● Harris Funeral Homes v. EEOC, in which funeral home worker Aimee Stephens was terminated for coming out to her employer as transgender

“Our National LGBTQIA family has been under a series of attacks under this current administration,“ said Kiara St. James, Co-founder and Executive Director of New York Transgender Advocacy Group (NYTAG), which is co-sponsoring the event. “It has been exact and intentional in stripping many recently hard-won protections in the workplace and healthcare. If the court decides it is legal to discriminate against LGBTQ* workers, it is Black trans women who will be the most impacted, and it will only increase the national epidemic of violence towards them. October 8th will set the tone as to whether our nation will continue to slide down the abyss of intolerance or begin to push back against it.”

Housing Works is a healing community of people living with and affected by HIV/AIDS. Founded in 1990, our mission is to end the dual crises of homelessness and AIDS through relentless advocacy, the provision of lifesaving services and entrepreneurial businesses that sustain our efforts. 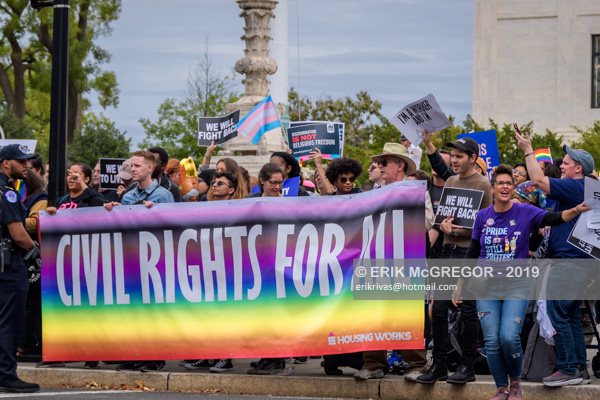