New York, NY – About 30 members of the activist group Rise and Resist were arrested after disrupting “Business As Usual” at a Climate Emergency protest outside the Bloomberg Global Business Forum held at the Plaza Hotel at 59th Street and 5th Avenue on September 25, 2019 blocking traffic at the intersection to protest the continued investment in the carbon economy despite overwhelming scientific evidence that to do so endangers human survival.

On September 25, bankers, investors, and heads of state will gather at the Bloomberg Global Business Forum to discuss solutions to the climate crisis. Climate activists from Rise and Resist and Peoples Climate Movement NY gathered outside to challenge the legitimacy of those inside to address the problem.

Many of the people attending—including keynote speaker Narendra Modi and JP Morgan Chase CEO Jamie Dimon—play a key role in perpetuating the climate emergency and profit from fossil fuels.

Climate activists are demanding an end to deception, delays and greenwashing. They demand an end to business as usual.

“When the house is on fire, you don’t call in the arsonists.” – Stu Waldman, Rise and Resist

The science is clear: the carbon economy caused the climate crisis. This raises the obvious question. Can forum attendees, who are heavily invested in fossil fuels, be trusted to solve the problem they helped create and continue to profit from?

From Narendra Modi’s extensive coal investments to Jamie Dimon/JP Morgan Chase’s $196 billion investment in expanding fossil fuel extraction the answer seems to be a resounding no. In the face of overwhelming scientific evidence, they continue to pursue market-based solutions designed to preserve the profitable carbon economy.

“The CEO of a bank that provides nearly $200 billion in financing for the fossil fuel industry lecturing on the climate crisis is like the Sacklers lecturing on opioid addiction. We don’t need Jamie Dimon’s advice. We need him to do the right thing—divest.” – Livvie Mann, Rise and Resist

Experts agree that with barely a decade left to stave off impending climate disaster only radical, unprecedented, global change can preserve human existence.

“We cannot allow the rich and powerful to determine the future of the planet. Now is the time for the voices of the people to be heard; now is the time for bold solutions.” – Leslie Cagan, Peoples Climate Movement NY

“When do we say this is a Climate Crime Against Humanity, and that all involved should be held accountable? Enough!” – Todd Fernandez, 350NYC 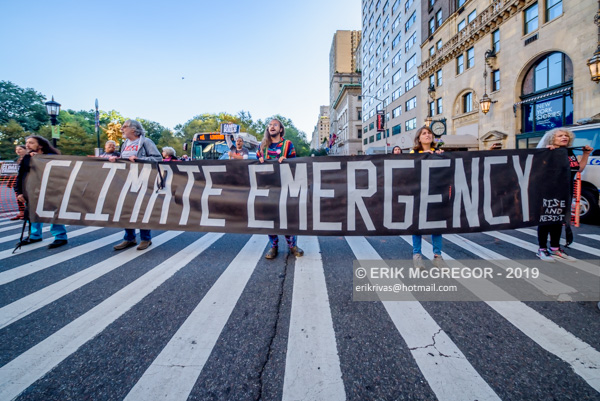