New York, NY — Members of the Stop the Williams Pipeline Coalition along with elected officials held a rally press conference on September 24, 2019 outside National Grid Corporate Headquarters in Brooklyn calling out corporate utilities National Grid and ConEdison for their role in perpetuating climate change by expanding fracked gas pipelines and other infrastructure in New York City and Long Island, unethically raising rates, and holding small businesses and local residents hostage in order to manufacture a demand for the twice-denied Williams NESE fracked gas pipeline. Just four days after 300,000 New Yorkers and 4 million people around the world participated in the Global Climate Strikes, Governor Cuomo joined WNYC reiterating his opposition. “We’re against gas pipelines…We’ve taken a position.” regarding the Williams NESE pipeline.

“I urge National Grid, Con Edison, and the Public Service Commission to take their responsibilities seriously by acting immediately to transition away from the use of natural gas,” said State Senator Julia Salazar. “The days of building new pipelines and charging customers ever-increasing rates to serve must end. If the utilities are unwilling to make transformative changes, then we owe it to New Yorkers to turn to public ownership and control instead as we initiate the full transition to renewable energy.”

“Con Edison’s rate hike will marry us into fossil fuel infrastructure for generations to come, off the backs of hard-working New Yorkers who can ill afford another increase,” said Council Member Costa Constantinides, Chair of the Committee on Environmental Protection. “We saw this summer how Con Ed poorly communicated updates as outages left swaths of the five boroughs in the dark for hours – if not days. That they showed hardly any remorse afterward begs the question of how prepared they are to continue serving New Yorkers, especially with this new infrastructure the utility hopes to lay.”

“Instead of being a good, cooperative corporate citizen, National Grid has chosen to engage in coercive practices by instituting a self imposed moratorium,” said District Leader Joshua Skaller on behalf of Assemblyman Robert Carroll. “Their goal is to put pressure on us to approve the William Pipeline and we’re not going to stand for it.”

Following the press conference, rate-payers marched to the utility customer service center and delivered their energy bills attached to a letter to National Grid and ConEdison with their concerns and their demands: No Rate Hikes, No Fracked Gas, No Williams NESE Pipeline.

“Both ConEd and National Grid’s rate case proposals fail the climate test by spending hundreds of millions of our ratepayer dollars on expanding and extending the life of fracked gas infrastructure,” said Lee Ziesche, Community Engagement Coordinator with Sane Energy Project. “So we’re here to bring the message of youth climate strikes directly to National Grid’s door before confidential rate case settlement negotiations begin today and let them know we will not let them expand fracked gas use in our communities.”

“Building new fossil fuel infrastructure in New York will make us even more vulnerable to punishing heat waves, flash floods, and record breaking tropical storms. This isn’t a scare tactic, it’s science” said Patrick Houston, Climate and Inequality Campaigns Associate with New York Communities for Change. “Our communities don’t deserve that future. Utilities like National Grid must stop impeding the development of renewable alternatives that will create thousands of jobs while mitigating climate catastrophe. Our future as a city is more important than their profit.”

“It’s clear ConEd and National Grid are holding our energy system hostage to push more fracked gas infrastructure on us that we don’t even need,” said Amber Ruther with NYC-DSA EcoSocialist. “Thankfully there’s an alternative. We can take power back into our own hands. We can have publicly owned, democratically controlled utilities.”

“National Greed’s claim of insufficient gas is a blatant lie, designed to pressure Governor Cuomo into approving a pipeline that New Yorkers have decisively rejected,” said Laura Shindell of Food and Water Action. “Data from state agencies shows that gas demand is flat or even decreasing, and data from National Greed’s own filings show that they used 35% less gas than they anticipated in 2017. Attorney General Tish James’ investigation will probe what we already know- the gas moratorium is an abuse of monopoly power and National Greed is holding ratepayers hostage to serve their shareholders.”

“Close to 5 million people just marched in the streets to demand real action on the climate crisis, and yet National Grid and Con Edison think no one will notice when they ask to increase our rates to pay for new fossil fuel infrastructure? Fat chance,” said Robert Wood of 350Brooklyn. “We are watching and watching closely, and we will fight with everything we have to democratize our energy systems and ensure that these backwards, profit-hungry corporations lose their social license. Public power combined with the wholesale embrace of renewable energy, is the only way forward.” 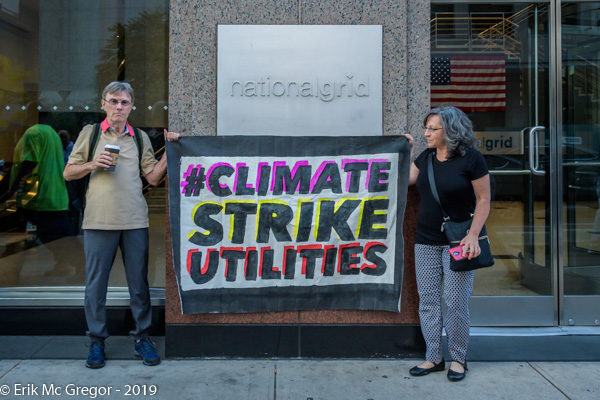