New York, NY – Hundreds Puerto Ricans dressed in white participated on a silent procession carrying signs and banners through the streets of New York on September 22, 2019 to focus the nation’s attention on this callous and craven neglect of U.S. Citizens in Puerto Rico still struggling for survival in the aftermath of Hurricane Maria.

Elected officials such as Brooklyn Borough President Eric Adams and Councilwoman Diana Ayala lend words of support and encouragement to the crowd of marchers.

Close to two years after Hurricane Maria devastated Puerto Rico, the Island remains in crisis owing to the lack of resources and empathy from its U.S. colonizer.

It took more than six months for the death count to come even close to reality. Several schools are still closed. More than 100,000 left the Island since. Many areas remain in the dark without electricity. Disease is still climbing and the Island’s debt continues in debate.

This year’s event falls on the eve of the anniversary of one of the island’s largest insurrections, “El Grito de Lares” uprising.

Participants walked 2.5 miles in unity, as one, in silence; from East Harlem to Trump Tower on 57th Street and Fifth Avenue remaining in peace for approximately 15 minutes before dispersing. 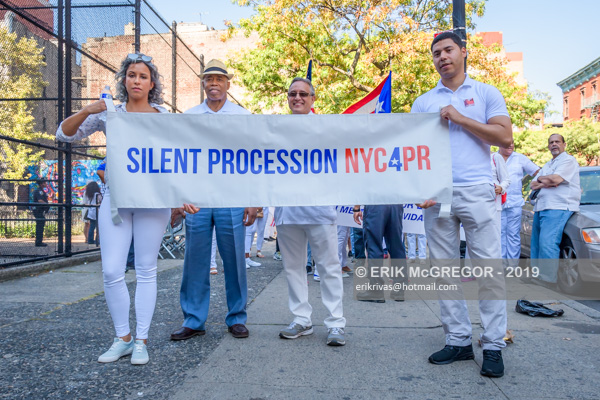