The New York City subway system is at a turning point. Despite population and job growth, unreliable transit service is causing ridership to decline. The future of the subway is riding on the 2020-2024 MTA Capital Program, the agency’s forthcoming plan to maintain and upgrade assets like track, rolling stock, and stations.

The state legislature passed a historic congestion pricing charge with the understanding that the MTA would use the revenue to deliver subway modernization projects on-time and at reasonable costs. Advocates are now launching a major mobilization to ensure the Governor and the MTA deliver these benefits for riders.

Today TransitCenter, along with Elected officials and partner organizations Riders Alliance, Tri-State Transportation Campaign, Rise And Resist Elevator Group and Reinvent Albany, launched the Build Trust campaign. The campaign calls on Governor Cuomo, MTA Chairman Pat Foye, and state lawmakers to prioritize the right projects, control costs, and increase transparency in the 2020-2024 MTA Capital Program. By adopting this framework, they can set the subway on a course of steady improvement.

The sorry state of the subway today reflects poor decisions in past MTA capital programs, where too many resources went toward gold-plated expansion mega-projects at the expense of the existing system that millions of people depend on. High construction costs and habitual project delays slowed progress and led New Yorkers to lose trust in the MTA’s stewardship of the system.

Governor Cuomo, who controls the agency, must not repeat those mistakes this time around. Currently, however, transit riders are in the dark. Release of the capital program is behind schedule and the project list is currently being debated behind closed doors. The plan still has not been unveiled to the public or the MTA Board, even though the board is expected to vote on it two weeks from now.

New York can’t afford a secretive rush job on matters of such critical importance. The next capital program must deliver the repairs and upgrades necessary for the subway to function at the level that New York’s growing population demands. In addition to keeping existing infrastructure in a state of good repair, the capital program should include major investments in station accessibility, modern signaling, and new subway cars.

To deliver the improvements riders need, the Build Trust report lays out a four-point framework for the 2020-2024 MTA Capital Program:
(1) This fall, the governor and the MTA produce a capital program that addresses core maintenance priorities and invests in upgrades that yield better service for riders across the whole system, accompanied by a detailed 5-year implementation schedule;
(2) The MTA makes capital cost control a primary goal and sets benchmark unit costs for common subway upgrades;
(3) The MTA creates an accurate, up-to-date, user-friendly online project tracker for the capital program;
(4) State lawmakers hold robust oversight hearings on the capital plan beginning in fall 2019.

By prioritizing the right projects, setting high standards for project delivery, and committing to transparency measures that invite public accountability, Governor Cuomo, MTA leadership, and state lawmakers can fix and modernize the subway while building trust in the agency.

“The stakes couldn’t be higher for Governor Cuomo and the MTA –– to provide New Yorkers with a reliable, accessible transit system, they need to get the next capital program right,” said TransitCenter Senior Associate Colin Wright. “They have to invest in the projects that will improve service for the greatest number of people, and deliver those projects at costs that don’t break the bank. Transparent and accurate progress reports will hold the MTA accountable to riders as it implements the capital program, building trust in the agency.”

“Build Trust is about restoring access to our city and integrity to the MTA,” said Riders Alliance Policy & Communications Director Danny Pearlstein. “Millions of New Yorkers are looking squarely at Governor Cuomo for an MTA capital plan that finally fixes the subway. Riders are sick and tired of slow and unreliable service, inaccessible and flooded stations, and trains that don’t measure up to our peer cities’ transit systems. The Riders Alliance is excited to work with our partners at TransitCenter, Reinvent Albany, and the Tri-State Transportation Campaign to hold our leaders to account and keep winning better transit.”

“In a few weeks the MTA board will vote on a plan to spend $30 billion to $50 billion in public funds. This 2020-2024 capital plan was created in complete secrecy with zero public input or public review,” said Rachael Fauss, Senior Research Analyst for Reinvent Albany. “It’s like the CIA has taken charge of the future of the subways, buses and commuter rail. The Build Trust campaign aims to get America’s largest transit agency back to working with the public in a transparent, accountable way including open meetings of the Capital Program Review Board and oversight by the State Legislature.”

Assistant Assembly Speaker Felix W. Ortiz: “The Build Trust campaign is asking for long overdue priorities. We need better maintenance priorities and standardized benchmarks that will permit the MTA to improve our transit system. New Yorkers also need to know how transit projects are progressing. Legislative oversight will help us get the job done and the subways running the way we expect.”

Assemblymember Jo Anne Simon said: “Congestion pricing was an enormous victory for New York State in ensuring a dedicated funding stream for the MTA,” said Assemblymember Jo Anne Simon. “Now, we must ensure that the money is spent efficiently, effectively, and with the transparency that the public deserves. A whopping three-quarters of our subways are inaccessible to people with disabilities, the elderly, people with strollers, and many others. Failing signals continue to impact commutes. I am grateful for the hard work that advocates from TransitCenter, Riders Alliance, Tri-State Transportation Campaign, and Reinvent Albany do to hold the state and the MTA accountable to responsibly fix our transit system.”

Assemblymember Harvey Epstein said: “I am confident that the MTA wants to build trust with riders and to that end, will remain committed to its pledge to increase transparency with respect to the next capital plan and all other aspects of its operation. I’m proud to stand with advocates to hold the MTA accountable for delivering a capital plan that makes the upgrades riders need, including accessibility improvements, and I look forward to pushing for oversight hearings to ensure this is an open process.”

“Riders and commuters in our world class city deserve a world class transit system – a 21st century network that can be built with funding that comes from hard-fought Congestion Pricing revenue. But riders need to know exactly what we’re getting for the billions of dollars that will be generated from those fees, and when we’ll see results of more accessible stations and new signals, tracks, rolling stock and communication systems,” said Lisa Daglian, Executive Director Permanent Citizens Advisory Committee to the MTA. “We deserve a say in what gets included and prioritized in the MTA’s next Capital Plan. A fair and transparent public review and engagement process is critical to rebuilding the riders’ trust that has been lost over the years, and show that reinvestment – not disinvestment – is the path forward to the transit system we need and deserve.”

“A lack of accessibility to mass transit is much more than inconvenience. It limits employment options. It creates safety hazards. Put simply, it leaves those with mobility impairments unable to join in all the city has to offer,” said Christopher Schuyler, Senior Staff Attorney, Disability Justice Program, New York Lawyers for the Public Interest. “Increasing the number of accessible subway stations also promises to improve the Access-A-Ride program. More accessible stations will alleviate the demand on AAR, reduce the long-term costs to run the program, and allow the MTA to focus on providing improved AAR service to those who need it most.”

“People with disabilities must see a binding enforceable agreement that holds the MTA accountable for achieving full accessibility,” said Monica Bartley, Community Outreach Organizer, The Center for Independence of the Disabled, NY (CIDNY). “It is imperative that we eliminate this barrier to employment for people with disabilities and finally ensure full transportation access in accordance with City, State and Federal laws.” 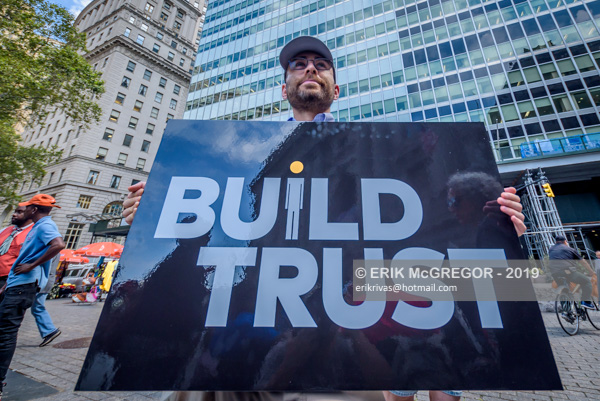