Queens, NY – Members of the activist group Rise and Resist performed an IMMIGRANTS MAKE BASEBALL GREAT banner drop on September 7, 2019 during the fifth inning at the Mets-Phillies game in Citi Field to call attention on the current administration immigration policies.

As fans cheer their teams’ international stars, most of them Latino, the Administration continues its deadly assault on Latinx people fleeing violence, poverty, and the ravages of climate change. Many of those unlivable conditions were perpetrated by U.S. policies of the last 100 years. Immigrants commit fewer crimes than native-born Americans, and many work dangerous, arduous jobs. More than 90% show up for their asylum/immigration court hearings; they do not need to be locked up in inhumane detention centers.

Immigrants always have and continue to make America great. Yet they are pawns in the Trump Administration’s racist, nihilistic campaign to woo the white nationalist vote. The arbitrary, often deadly policies have intensified this summer despite last summer’s ruling against family separation as a deterrent.

That’s one month in an assault on non-white immigrants that began with the Muslim ban in January 2017. Trump’s racist, dehumanizing language was also repeated by the mass murderer in El Paso, who slaughtered 22 people on August 3 to “stop the Hispanic invasion.”

Baseball is one of the many realms of American life enriched by immigrants. Our banner is both a message of support and a demand for a stop to the deportation and detention of our immigrant brothers and sisters. 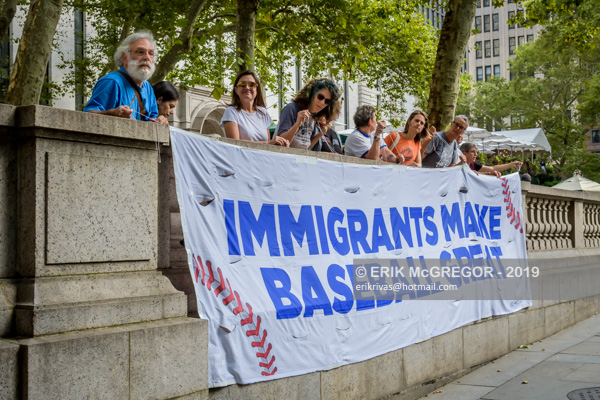