Rockville Centre, NY – Over 15 organizations representing thousands of Long Islanders rallied outside Senator and chair of the Senate environment committee Todd Kaminsky office on August 14, 2019 and delivered a strong message calling on the Senator, who championed the historic 2019 Climate Leadership and Community Protection Act to call on Governor Andrew Cuomo, and the Department of Environmental Conservation (DEC) to deny construction permits for the unwanted and unnecessary Williams NESE fracked gas pipeline.

The rally follows New Yorkers submitting over 25,000 public comments in just 6 short weeks this summer to the DEC opposing the Williams Pipeline, and the release of a new poll that shows the more New Yorkers learn about the pipeline, the more they oppose it.

“On May 15, New York denied permission for Williams Co. to destroy our waters and lock us in to decades of more fossil fuels. Two days later, Williams claims they can mitigate their destruction in a re-application,” said Kim Fraczek of Sane Energy Project. “This time, they’re coming with their corporate utility bullies, National Grid And Con Ed to manipulate customers that the economy will collapse without this pipeline, and denying service as a last ditch effort to create a manufactured crisis. New Yorkers are onto their games, and 25,000 residents plus bi-partisan elected leaders are standing up and demanding action on renewables NOW!”

Roxi Sharif, a constituent of Senator Todd Kaminsky and a leader at Long Island Progressive Coalition said, “The Williams Pipeline is a stranded asset of a dying industry which will cost people like you and me economic security, and which people across Long Island will end up paying for. Senator Kaminsky, I do not stand with Fossil Fuels. And I don’t believe our NY economy should either. You were the main sponsor and driver of NY landmark climate bill. We need your leadership now to continue our renewable transition and to end the era of fossil fuels. We cannot afford a single additional project.”

Joe Verone, a constituent of Senator Todd Kaminsky from West Hemstead said, “This past legislative session has produced many positive things to take bold action now to stop this pipeline. The Williams Pipeline Co. has a dismal record for gas leaks, explosions, and worker safety. This pipeline threatens the health of our citizens, our water, marine life, and jeopardizes our important tourist, beach, visitor, and fishing industries.”

Jim Brown, a constituent of Senator Todd Kaminsky, and active with the Green Party of Nassau Co. said “My wife Gail and I, along with many other Long Islanders, are Hurricane Sandy survivors. We have experienced the ravages of climate chaos firsthand. We had to relocate after storm following the destruction of our home in Long Beach…this pipeline is unnecessary. It will harm both human and marine life, and from a planetary perspective, this pipeline is totally incompatible in the fight against climate change. We all know this.”

“There is no way to protect a safe and livable climate unless we get off fossil fuels as quickly as possible. The Williams pipeline would represent a decades-long commitment to dirty energy fueling the climate crisis,” said Food & Water Watch organizer Laura Shindell. “If Governor Cuomo is serious about tackling climate chaos and complying with the state’s new clean energy law, he must reject the Williams fracked gas pipeline.”

The Williams Company is seeking approval to construct the Northeast Supply Enhancement (NESE) pipeline to transport fracked gas from Pennsylvania to Brooklyn, Queens and Long Island, but a report from a former NYSDEC regional director proves there is no need for the gas.

The DEC temporarily denied Williams’ permit in May after determining the project would negatively impact New York waters. In their public comments to the DEC, many New Yorkers also said the pipeline should not be built because of its climate impacts. 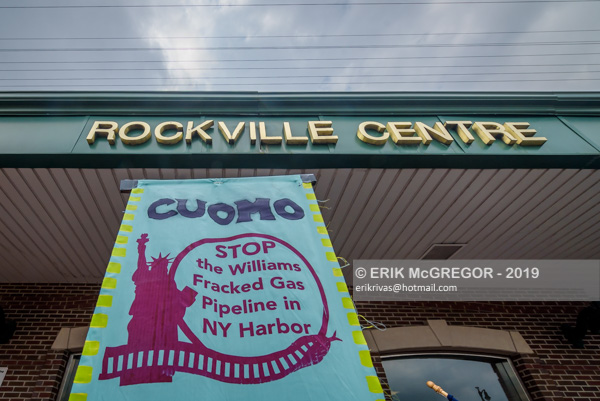