New York, NY – The League of Professional Theatre Women (Kelli Lynn Harrison & Catherine Porter, Co-Presidents), an organization which has been leading the gender parity conversation and championing women in the professional theatre for over 35 years, led the seventh annual Women Stage the World Parade on June 11, 2019. A march to advocate for equal representation for women in theatre, beginning at the Circle in the Square Breezeway on 51st Street and ending in Times Square.

The Parade welcomes all theatre women and allies to join together to shed light on the lack of gender parity in the field and ask theatre decision makers to take a step toward positive change by having #OneMoreConversation with a female job candidate before hiring.

In these efforts, the League has quantified the current state of gender parity with the Women Count Report series, raising awareness with this March, and offering a solution with #OneMoreConversation.

March participants gathered at the TCircle in the Square Breezeway on 51st Street and weaved through Times Square and the Broadway district. The League of Professional Theatre Women invited all theatre women and allies to participate in this march, as we boost awareness, lift our voices, and advocate for more opportunities for women in theatre. All march participants are encouraged to dress as their favorite historical theatre woman or in all white. Women Stage the World sashes and signs will be provided, as supplies last.

The tradition of donning costumes of noted women artists began in 1985 with the historic Guerilla Girls, and has continued with Women Stage the World and other LPTW Heritage programs. We embody women of the past, speaking out in the present, so our voice will be heard in the future. These programs recall a formidable heritage of activism, and are proof-positive that women COUNT.

Women Stage the World, an advocacy project of the LPTW, is designed to educate the public about the role women play in creating theatre and the gender barriers they face as men continue to outnumber women by 4 to 1 in key roles such as playwright, director and designer.

Women buy two-thirds of the tickets and represent 65% of the audience, yet 80% of the time the storytelling on stage is shaped by men’s voices, not women.

The Women Stage the World Parade and March prompted ticket-buyers to ask three questions as they make buying decisions:

(1) Who wrote, directed and designed this play?
(2) What is this theatre’s track record in giving opportunities to women?
(3) How can you spread the word and promote women’s voices?

Women Stage the World continues a long tradition of activism by women of the theatre. The Suffrage Movement would not have achieved success without our theatrical foremothers, who created the first-ever marches and street pageants, including the game-changing first March on Washington in 1913, which inspired many future equality marches. A century after the 19th Amendment, women are still fighting to have their voices heard, and be “counted” as valuable and equal citizens.

Like the suffragettes before them, Women Stage the World empowers women and men to become aware, take action and influence others. For the past seven years Women Stage the World has marched through Times Square- educating theatre goers about the importance of gender parity in the American Theater.

The League of Professional Theatre Women (a not-for-profit 501(c)(3) organization) has been championing women and leading the gender parity conversation in the professional theatre for over 35 years. Since its founding, the LPTW’s membership has grown to 500+ theatre artists and practitioners of all backgrounds, across multiple disciplines, working in the commercial and non-profit sectors.

To increase visibility of and opportunities for women in the field, the LPTW spearheads events, public programming, advocacy initiatives, media, and publications that celebrate industry luminaries, preserve the legacy of historic visionaries, raise awareness of the importance of nurturing women’s voices, and shine a spotlight on the imperative of striving for gender parity and fostering a diversity of expression, both in the theatre world and the world at large. 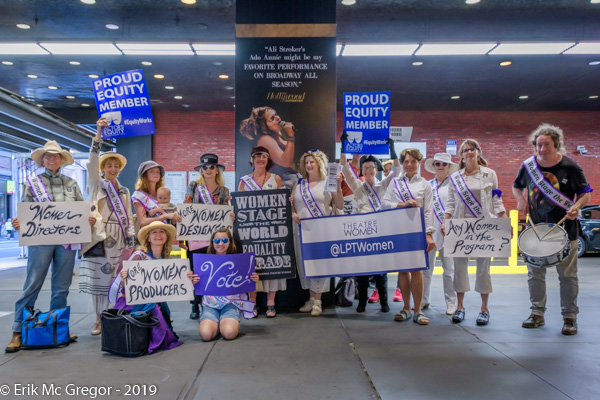