New York, NY – Judge Shlomo Hagler is expected to make a major ruling on May 21, 2019 regarding a lawsuit brought against the MTA to install elevators in every New York City subway station, in a case accessibility advocates are watching closely.

Before the hearing, disability advocacy groups and members of the plaintiff gathered outside the courthouse demanding true MTA system accessibility, in a rally called by the Brooklyn Center for Independence of the Disabled, the Center for Independence of the Disabled NY, Disabled in Action, The People’s MTA, People’s Power Assemblies, Transportation Alternatives, Radical Age Movement, Rise & Resist, UP-STAND and others.

New York Supreme Court Justice Hagler clearly stated during the suit’s last hearing that he’d have a ruling on the MTA’s motions this time.

“This is the fourth hearing after we filed suit two years ago,” said Sasha Blair-Goldensohn, who uses a wheelchair and is a plaintiff in the case. “Until now, the MTA has offered only non-binding settlements, pleading poverty,” he explained. “We’ve rejected those ‘trust me’ proposals because they’re worthless—while outside the courtroom, Cuomo has touted Fast Forward as if it were a done deal. It’s a great plan, but only words on paper until he allows the lawyers to commit.”

Advocates also recall Malaysia Goodson, the young African-American mother who in January fell to her death carrying her baby and stroller in a subway station with no elevators. They called her death preventable, arguing that she would be alive today if the 53rd Street station where she fell had been equipped with elevators.

The website for the plaintiff’s lawyers states: “The City’s subway system has long been City’s lifeline, enabling over 6 million people per day to participate in its economic, political, cultural and civic life. Indeed, an average resident of New York depends on subways to carry out a vast array of essential tasks every day of his/her life.”

“For people with disabilities, however, meaningful access to the subway system has remained all but illusory. The rare accessible stations tend to be spaced out by at least 30 blocks and constitute less than 20 percent of the total number of stations. In numerous parts of the City, residents with disabilities have no access whatsoever. As a result, they remain completely barred from a mode of transportation that has shaped City’s life in a way that is unparalleled elsewhere in the country.” 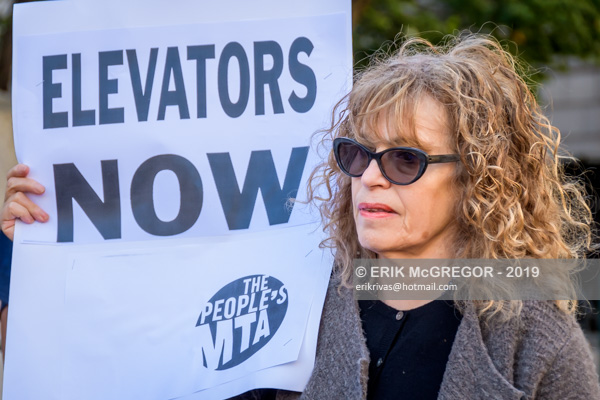