New York, NY – The Stop The Williams Pipeline Coalition held a rally and press conference at the steps of City Hall on May 16, 2019 to celebrate victory after the New York State DEC conditionally rejects toxic and unnecessary pipeline in the face of threatened moratoriums, New Yorkers vow this pipeline will never be built.

In the heat of a nearly three-year fight against the Williams fracked gas pipeline, the New York Department of Environmental Conservation issued a temporary rejection of the permit to the dangerous and unnecessary project. The rejection “without prejudice” allows Williams to resubmit its application with additional mitigation measures.

The pipeline is slated to carry fracked gas from Pennsylvania through New York Harbor and out to the Rockaways. Activists will address the decision at a rally on the steps of City Hall tomorrow at noon.

The Stop the Williams Pipeline Coalition issued the following statement: “New Yorkers are winning the fight against the Williams fracked gas pipeline, and we’ll make sure this dangerous and unnecessary pipeline is never built. While Cuomo refuses to stand up for our health and safety, utilities and gas companies are holding our energy needs hostage, manufacturing false demand, and threatening moratoriums as they poison our communities. New York is at a crossroads, and now is the time to meet National Grid’s moratorium threat with a massive increase in funding for renewables. The DEC’s decision is even more reason why we need a statewide ban on all new fossil fuel projects. There’s no room for fracked gas in a Green New Deal for New York.”

The decision comes just hours after opposition to the project moved decisively to the national level, with U.S. representatives Alexandria Ocasio-Cortez, Jerrold Nadler, Hakeem Jeffries, and 8 other congress members publicly denouncing the project.

Opponents contend that the project—which would require trenching through an area of seabed containing lead, PCBs, arsenic, and more chemicals—would cause irreparable harm to New York’s recovering harbor, contribute to climate chaos and storms like Hurricane Sandy, and make it impossible to meet the state’s climate action goals at a time of climate emergency.

The lack of an outright denial frustrated thousands of New Yorkers, who have been fighting the Williams Pipeline for three years. In that time, they have dropped banners; organized countless rallies, pickets, and community meetings; met with FERC commissioners and state legislators; marched 1000-strong over the Brooklyn Bridge; knocked on thousands of doors; and engaged in non-violent civil disobedience demanding that federal and state authorities reject the dangerous project and usher in a renewable energy New York.

Rigorous research shows that the proposed pipeline is not only dangerous but completely unnecessary. National Grid, the would-be sole buyer of the pipeline’s gas, has yet to refute these findings, despite claiming a gas shortage and threatening to end new customer hookups if the pipeline isn’t approved. 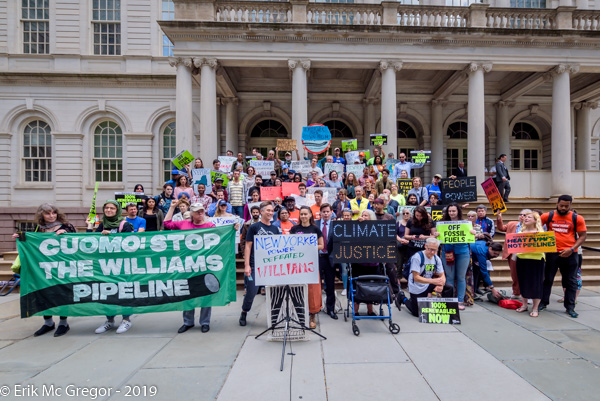