NYC stand with Indigenous Peoples of Brazil and the Amazon

New York, NY – Indigenous leaders from Brazil and allies held a non violent direct action outside the Permanent Mission of Brazil in New York City on April 23, 2019 to raise their voices and show solidarity with the indigenous resistance and “Terra Livre,” the national indigenous mobilization in Brazil. Signatures were delivered to representatives at the Permanent Mission of Brazil concurrent to a rally on the street.

Brazil’s Indigenous peoples are under increasing attack with newly elected President Jair Bolsonaro and his regime’s devastating assaults on social and environmental protections. Indigenous organizations in Brazil are mobilizing locally and globally to protect and defend their communities, the Amazon rainforest and the global climate.

Sônia Bone Guajajara, Executive Coordinator for the Articulation of Indigenous Peoples of Brazil (APIB) adressed the crowd at the rally. Sônia Guajajara comes from the Araribóia Indigenous Land, of the Guajajara people and is a well-known and respected leader. She was a candidate for Vice-President of Brazil in the 2018 Elections, and in 2015, she received the Order of Cultural Merit from the Federal Government, through the Ministry of Culture.

As threats increase, women land defenders are harmed first and worse. This is a critical time to stand with courageous Indigenous women leaders in Brazil, like Sônia Bone Guajajara, who are fighting everyday to protect human rights, forests, water, climate, communities and future generations.

The Coordination of the Indigenous Organizations of the Brazilian Amazon (COIAB) and the Articulation of Brazil’s Indigenous Peoples (APIB) have written a collective petition to denounce Bolsonaro’s egregious attacks on indigenous rights and territories, particularly in the Amazon.

They have called on all of us in the international community to stand with them in solidarity and resistance to demand that the Brazilian government reinstate fundamental human rights standards and protect the Amazon’s ecological integrity.

WECAN International and Amazon Watch are collaborating in collecting signatures at https://amazonwatch.org/take-action/halt-the-brazilian-governments-assault-on-indigenous-peoples 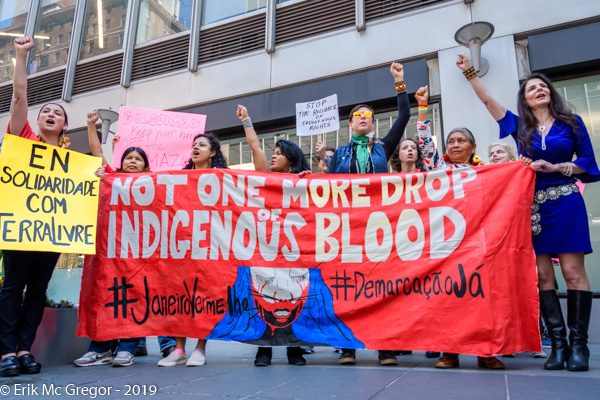