New York, NY – Activists from Extinction Rebellion New York City (XR-NYC) engaged in nonviolent direct action to confront climate change outside City Hall on April 17, 2019, to demand a declaration of Climate Emergency and the pursuit of policies to reach zero emissions in the city by 2025.

Our government is failing to respond to the climate emergency in a manner commensurate with the threat. In his article in New York Magazine announcing a $10 billion seawall around lower Manhattan, Mayor Bill de Blasio stated that “This is a national emergency without a national policy. And that has to change.”

It has been estimated that if the Climate and Community Protection Act (New York State) and the Climate Mobilization Act (New York City) both pass, as well as proposed congestion pricing, there will be somewhere between a 10 – 20 percent reduction in emissions by 2030, and an approximately 50 percent reduction by 2050, which is utterly inadequate. We demand that our government Tell the Truth and declare a climate emergency!

While there’s lots of news about climate change and its impacts, the media and government are not telling the whole truth about the full impact of climate change: mass migrations, food shortages, more severe flooding and drought, wildfires and mass die-offs. Come to City Hall to demand a declaration of climate emergency. This won’t be just another rally or speeches, this will be a group of passionate people raising their voices during the most serious crisis of our time.

The current administration is pouring money into protecting the financial interests, while leaving most of NY to suffer the fates of climate induced flooding – we demand that they Tell the Truth about the dire situation and take bold action to respond.

Megan Lazaros is prepared to be arrested on Wednesday, despite the fact that she has never been arrested before and that she’s having surgery the previous day and will be on crutches. Ms. Lazaros said, “I’m protesting the day after my surgery, because change is of the greatest urgency. There’s no time to spare. I am willing to do whatever it takes to create change that will benefit all of us – not just a wealthy few. I am privileged enough to put my body on the line, hurt or not, so I will.”

The demands of XR-NYC are as follows:

The Extinction Rebellion movement around the globe has been taking to the streets and engaging in direct action to demand that the world’s governments Tell the Truth and Declare Climate Emergency Now. Without unprecedented action to achieve the immediate drawdown of the carbon economy, the Earth is in its Sixth Mass Extinction.

Founded in the UK in late 2018, XR is an international movement that carries out nonviolent direct action (NVDA) and civil disobedience campaigns with worldwide impact. In November, XR in London occupied the five main bridges over the River Thames for six hours, described as “one of the biggest acts of peaceful civil disobedience in the UK in decades.” 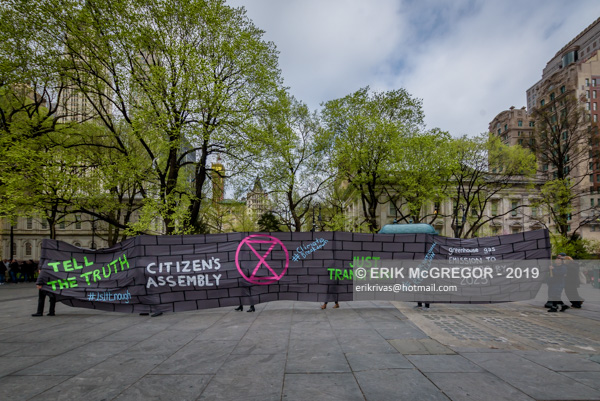