The final report was released to Attorney General Barr on March 22nd. House Judiciary Chairman Jerry Nadler and five other Committee Chairs gave the Attorney General a deadline of April 2nd to turn over the report to Congress, and the deadline was missed.

The NYC event is part of a nationwide protest organized by a coalition of hundreds of public interest organizations including Rise and Resist, Common Cause New York, Empire State Indivisible, One Queens Indivisible, and Four Freedoms Democratic Club.

Attorney General William Barr’s 4-page, partisan summary of the Mueller report is totally unacceptable. The people deserve to see Special Counsel Robert Mueller’s hundreds of pages of findings in full- and as much of the underlying evidence as possible.

House Judiciary Chairman Jerry Nadler and five other Committee Chairs have given the Attorney General a deadline of midnight April 2nd to turn over the report to Congress. If he fails to do so, we will join a national call for demonstrations on Thursday, April 4th to demand the Department of Justice release the full Mueller report.

New Yorkers are demanding the truth- and asserting that in America no one stands above the law- not even the President. 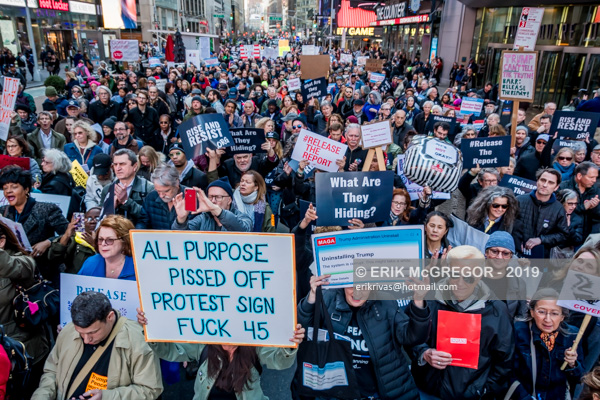