New York, NY – The University Student Senate (USS) of the City University of New York (CUNY), students, faculty, staff, community partners, concerned New Yorkers, and elected officials held a rally and a press conference outside the City Hall gates on March 23, 2019, calling on the state to invest in CUNY in their final budget for the fiscal year. The rally was followed by a march across the Brooklyn Bridge, culminating at the steps of Brooklyn Borough Hall.

This march is a call to action for lawmakers to rectify the trend of increased divestment in public higher education and maintain the state’s commitment to ensuring an affordable, accessible, and excellent higher education for all.

We call on lawmakers to commit $32 million to reinstate a Tuition Freeze for public colleges, $74 million to fill the TAP Gap, and further investment in the expansion of opportunity programs and support services, as well as equitable contracts of 7K for CUNY faculty and staff.

The March in March was first established by the CUNY University Student Senate in 2016 to fight for the restoration of a proposed $500 million dollar cut to CUNY’s budget. As a result of USS and community partners’ efforts, the cut was restored and a Tuition Freeze was won for CUNY schools.

The March itself has been, and still is, a call to action for the CUNY community to rise up and let our collective voice be heard in the fight for a Tuition Freeze, increased public funding, and equitable faculty and staff contracts. This will be the 3rd March in March since its establishment in 2016.

Senator Julia Salazar said, “CUNY and SUNY, our public university systems, represent one of the most effective engines for social mobility that we have in this city. There is no excuse for the pattern of disinvestment, denial, and denigration showed by this administration in Albany. Public universities should be entirely tuition-free, as they once were in New York, and they absolutely should not be forced to take on the burden of further cuts.”

The University Student Senate (USS) of the City University of New York (CUNY) was founded in 1972 with the mission of preserving the accessibility, affordability, and excellence of higher education within the City University of New York; the organization is charged with protecting the rights of the student body, furthering the cause of public higher education and promoting the general welfare of its student constituents and the University. The USS delegates are responsible for the representative governance of the 500,000 students of the 25 CUNY campuses. 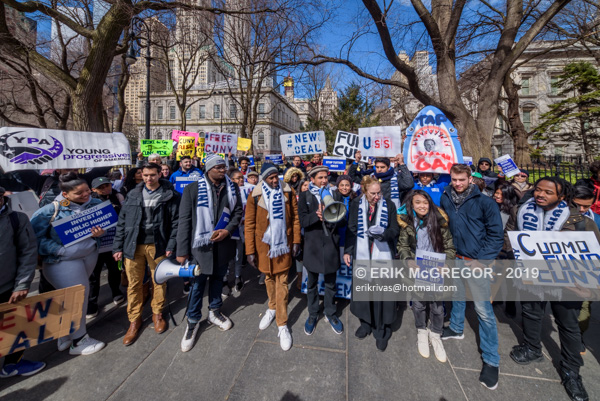