On the eve of the report release, several of the main branches of Chase Bank, along with the Manhattan Bridge over the East River were illumiated by light projections with clear messages:

On the morning of the report release, local climate activists took to the streets for a press conference at the site of the JP Morgan building on Wall St. to deliver the message to the press that JP Morgan Chase is the leading funder of fossil fuels contributing to global climate chaos.

Pete Sikora from NY Communities for Change spoke about the local pipeline fight against the Williams NESE Pipeline, that is part-funded by JP Morgan Chase, and Tom Ross, a local organizer with Sane Energy Project, and former investor with JP Morgan Chase gave sage advice to Jamie Dimon, CEO of JP Morgan Chase, and the public at large on how to move our money to a green energy fund called Green Century.

The report released today by Rainforest Action Network, BankTrack, Indigenous Environmental Network, Oil Change International, Sierra Club, and Honor the Earth, and endorsed by over 160 organizations around the world, reveals that 33 global banks have provided $1.9 trillion to fossil fuel companies since the adoption of the Paris climate accord at the end of 2015. The amount of financing has risen in each of the past two years.

Of this $1.9 trillion total, $600 billion went to 100 companies that are most aggressively expanding fossil fuels. Alarmingly, these findings reveal that the business practices of the world’s major banks continue to be aligned with climate disaster and stand in sharp contrast to the recent IPCC special report on global warming. That report, Global Warming of 1.5 °C, clearly outlined the critical need for a rapid phase-out of fossil fuels and estimates that the world’s clean energy investment needs are $2.4 trillion per year up to 2035.

Banking on Climate Change 2019 is the tenth annual fossil fuel report card and the first ever analysis of funding from the world’s major private banks for the fossil fuel sector as a whole. Expanded in scope, the report adds up lending and underwriting to 1,800 companies across the coal, oil and gas sectors globally over the past three years. The report also tracks fossil fuel expansion by aggregating data on which banks are financing the 100 companies most aggressively expanding fossil fuels.

JPMorgan’s volume of finance for fossil fuels 2016-2018 is a shocking 29% higher than the second placed bank, Wells Fargo. The bank stands out even more from its peers in its volume of financing for the top companies expanding fossil fuel extraction and infrastructure: since the Paris climate agreement, JPMorgan Chase’s $67 billion in finance for the expanders is fully 68% higher than that of Citi, in distant second place.

With Morgan Stanley and Goldman Sachs in 11th and 12th places respectively in the fossil fuel financing league table, all of the big six U.S. banking giants are in the top “dirty dozen” bankers of climate change. Together, U.S. banks account for 37% of all global fossil fuel financing. Collectively, the U.S. banks are the biggest source of funding for fossil fuel expansion since the Paris Agreement was adopted.

The report also grades banks’ future-facing policies regarding specific fossil fuel sectors and fossil fuels overall. In assessing restrictions on financing for fossil fuel expansion, no banks scored above a C-range grade, and most bank grades were in the D range. No banks have made commitments to phase-out fossil fuel financing in alignment with a 1.5°C-aligned Paris-compliant trajectory, despite the fact that numerous banks and bankers — including JPMorgan Chase CEO Jamie Dimon — have declared their support for the Paris Agreement.

The report also analyzes the banks’ unacceptably poor performance on human rights, particularly Indigenous rights, as it relates to the impacts of specific fossil fuel projects, and climate change in general. The case studies detailed in the report — from the Indigenous-led opposition to each of the three major proposed tar sands oil pipelines in North America, to the fragile Arctic National Wildlife Refuge under threat from drilling, to German utility RWE’s plans to expand an open-pit lignite coal mine while destroying the 12,000-year-old Hambach Forest — all highlight that banks lack effective energy and human rights policies to prevent them from financing these highly problematic projects and the companies behind them. 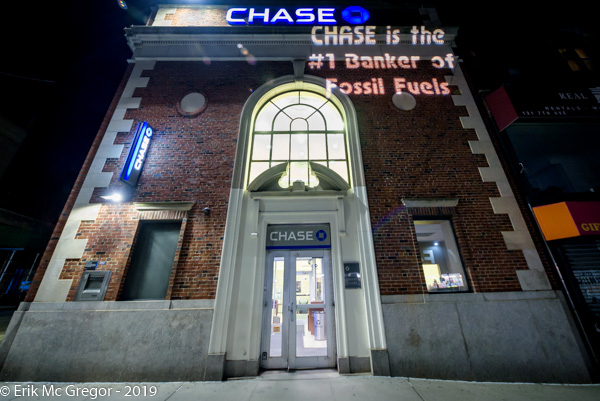