New York, NY – Thousands of school kids and college students walked out of class on March 15, 2019 to protest catastrophic climate change, perceived as the most pressing issue of their time. Students took to more than a dozen locations in New York City, including City Hall and Columbus Circle.

The global climate action strike and walkout included students from more than 100 countries and has its roots in a 2018 protest in Sweden spearheaded by an idealistic 17-year-old named Greta Thunberg.

Thousands of students from around the world walked out of class on March 15, 2019 to protest what many see as the most pressing issue of their time: catastrophic climate change. New York City youth organized a walkout, and strike for the Green New Deal and other necessary actions to solve the climate crisis.

In 2018, Greta Thunberg began the school climate strike movement with an action at Sweden’s parliament building and continued to strike every Friday, demanding action by politicians to address the climate crisis. In December of that year, NYC student Alexandria Villasenor began to skip school every Friday and protest alone outside of the United Nations, inspired by the protests started by Thunberg and gaining momentum across the world.

On Friday, March 15, students from around the world walked out on a strike from school to demand radical action from our leaders on climate change. We are calling for a just solution that matches the crisis at hand, not at a future time, but NOW!

New York City will be a main center for the Climate Strike in the US, with FIVE different rallies taking place directly after everyone walks out at 11 a.m. that will then converge into a massive march starting from Columbus Circle and ending in a rally at the American Museum of Natural History.

We, the youth of America, are striking because the science says we have just a few years to transform our energy system, reduce our greenhouse gas emissions, and prevent the worst effects of climate change. We are striking because our world leaders have yet to acknowledge, prioritize, or properly address our climate crisis.

With our futures at stake, we call for radical legislative action to combat climate change and its countless detrimental effects on the American people. We are striking for the Green New Deal, for a fair and just transition to a 100% renewable economy, and for ending the creation of additional fossil fuel infrastructure. Additionally, we believe the climate crisis should be declared a national emergency because we are running out of time. 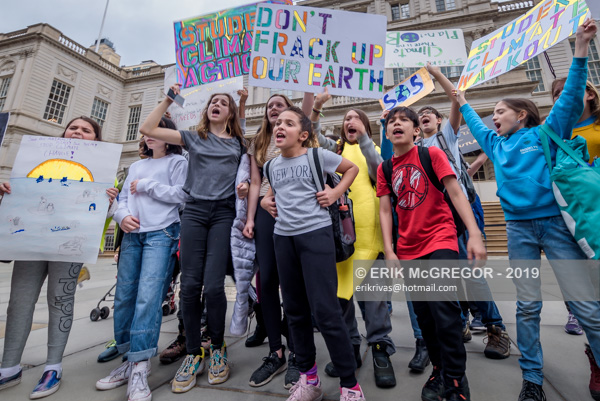