New York, NY – 60 New York City area elected officials have signed on to a letter opposing the Williams Northeast Supply Enhancement (NESE) fracked gas pipeline. Many of them, including NYC Comptroller Scott Stringer and City Council Speaker Corey Johnson, joined New Yorkers and youth climate strikers on the steps of City Hall on March 15, 2019 to call on Governor Cuomo and the Department of Environmental Conservation (DEC) to stop the controversial pipeline.

The project, which would include a 23-mile-long pipeline that would run from New Jersey out into New York Harbor, passing a mile and a half from Staten Island and connecting to an existing pipeline less than four miles off of Rockaway Beach, would deliver fracked gas from Pennsylvania to New York City.

New Yorkers packed three public hearings and have submitted thousands of comments to the DEC opposing the pipeline citing threats to local communities, marine life and the climate. More than 14,400 people have signed a petition calling on Gov. Cuomo to deny the pipeline, along with over 200 New York organizations.

“We need Governor Cuomo to show the same bold leadership the New York City elected officials opposing the Williams Pipeline have shown,” said Lee Ziesche, organizer with Sane Energy Project. “It’s not enough to say you believe in climate change. If Governor Cuomo is serious about a Green New Deal for New York he must reject the Williams NESE fracked gas pipeline.”

The DEC has until May 16 to deny, approve or delay necessary permits for Williams to begin construction on the pipeline. This comes ahead of an anticipated report dropping next Tuesday showing lack of demand for the unnecessary and toxic Williams pipeline, and before next Wednesday’s massive #GreenNewDeal4NY Accountability Forum.

“I stand with my fellow New Yorkers in opposing the Williams Pipeline, because adding this 23-mile fracked gas pipeline is an unacceptable risk that could contaminate our communities and marine life with toxic chemicals like arsenic, dioxin, and PCB’s,” said Assemblymember Ron Kim. “We have reached a critical moment in our country, and New York should be taking the lead in fighting climate change and greatly expanding our renewable energy usage. This project is a step backwards in the wrong direction, and will greatly harm the health and wellbeing of countless neighborhoods in our community.”

“The Williams Pipeline is dangerous. We are at a tipping point – our environment is fragile and, frankly, in a perilous state. Now is not the time to build out dirty and dangerous infrastructure that will keep us hooked on fracked gas for years to come,” said Assemblymember Linda B. Rosenthal

“The Williams Pipeline works against the need to convert to renewable energy sources,” said Assemblymember Felix Ortiz. “We have seen the destruction caused by changing weather patterns. There are already enough health problems and a weakened environment caused by our reliance on fossil fuel byproducts.”

“Fracked gas shouldn’t be treated like a bridge when we have a clear path to renewable energy now,” said Council Member Costa Constantinides, Chair of the New York City Council on Environmental Protection. “The Williams Pipeline will only disrupt the strides we’ve made to restore our once-amazing harbor after it was decimated by [Hurricane] Sandy. Do we really want to drive away the marine life we’ve seen return to places like Jamaica Bay or the Hudson River? We should focus on promoting renewable energy instead of ripping up our seabed or endangering our coastal communities.” 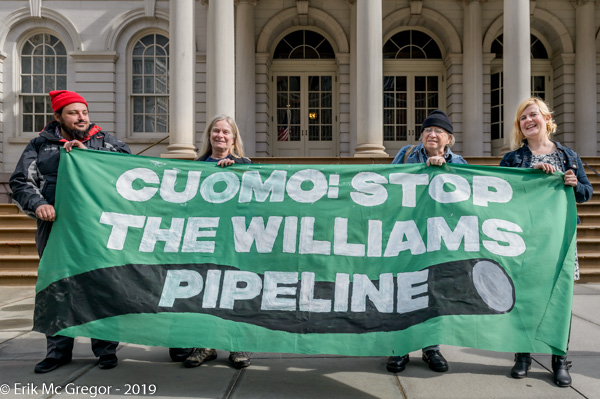