CUNY faculty give Governor Cuomo a wake up call before rallying at city hall to demand contract funding, fair raises and equity pay for adjuncts

New York, NY — Faculty and professional staff of the City University of New York escalated their fight for a fully funded union contract on March 14, 2019 with double-header rallies outside the Governor Cuomo’s NYC office and City Hall as City and State elected officials negotiate their budgets. Thirty thousand CUNY academic staff have been working without a new contract for fifteen months; 12,000 are adjunct instructors, who teach the majority of courses but earn a near-poverty wage.

“We’re here to tell Governor Cuomo and Mayor de Blasio that CUNY students deserve better than exploited, underpaid workers in understaffed departments and offices. Albany and City Hall must provide the funding for a fair contract with decent raises for all CUNY workers and $7,000 per course for CUNY adjuncts,” said Barbara Bowen, Ph.D., president of the Professional Staff Congress, the union representing faculty and staff at CUNY.

Full-time faculty salaries at CUNY lag thousands of dollars behind those at comparable institutions. And all faculty and professional staff struggle to afford New York City’s high cost of living. The average pay for a CUNY adjunct is $3,500 per course. That’s about $28,000 a year for the equivalent of a full college teaching workload.

The union’s 8 AM Wake-Up Call rally outside the Governor’s office comes as State budget negotiations intensify. More than two hundred picketers with a brass band, alarm clocks, and noise makers marched outside the mid-town office building chanting “Tax the rich, not the poor. Stop the war on CUNY!” The union is also mounting a digital and television advertising campaign to demand a fair contract and funding to support it. Legislators have proposed modest increases in CUNY funding, but much more is needed.

New York State funds the CUNY senior colleges and about 35 percent of the community college costs. Per-student State funding for CUNY senior colleges decreased 18 percent between 2008 and 2018, adjusting for inflation. CUNY’s collective bargaining costs are not fully funded by the State, and CUNY colleges have been forced to cut their already reduced budgets to fill the gap three years in a row.

The stakes are high when CUNY quality is at risk. CUNY colleges lead the nation in social mobility rankings, but the lack of investment leaves many without the support they need to graduate. Its student body is made up largely of low-income New Yorkers, immigrants and people of color.

New York City funds about 40% of CUNY community college costs, including collective bargaining, and a small share of senior college costs—a share that hasn’t increased in decades. The City budget for next year is early in its formation, but the Mayor has proposed no increase for CUNY senior colleges.

At 11 AM faculty and staff rallied on the steps of City Hall while speakers from their union and allied labor leaders called on the Mayor and the Governor to fund educational justice and wage justice at CUNY.

“Governor Cuomo and Mayor de Blasio rightly take pride in New York’s leadership in raising the minimum wage. But thousands of adjuncts on the City payroll are earning what amounts to less than minimum wage. Fair pay for everyone at New York City’s great public university is a demand that cannot wait.” said Bowen. 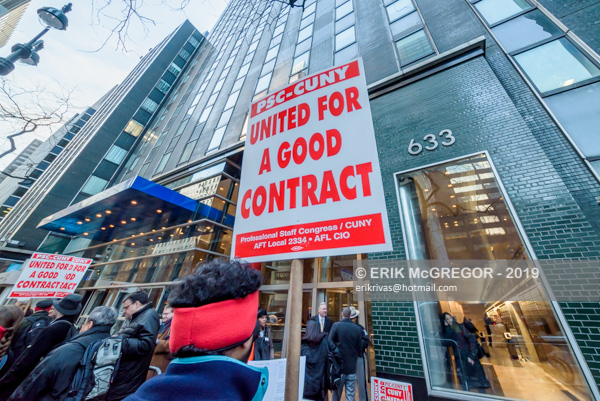