New York, NY – Activists with No New Jails NYC, citywide partners, and New York City residents held a rally at City Hall Steps on March 13, 2019 to speak out against Mayor De Blasio’s plan to expand Rikers with four new jails and call for investment into struggling neighborhoods to build safer and stronger communities.

Advocates and allies with the No New Jails NYC campaign came together to stand against Mayor De Blasio’s plan to expand Rikers with four new jails. Using $10+ billion to build more jails in our communities will not improve conditions, and will only increase surveillance on communities already targeted by policing.

No New Jails NYC was launched as an effort to ensure Rikers closes without construction of a new jail system, and to reroute the billions earmarked for new jails to address the needs of communities, which have faced decades of slashed city funding.

While conditions at Rikers have led to calls for its closure the Mayor has argued that adding more jails within NYC communities will improve conditions for the people locked up inside them. As has been the case with the existing neighborhood-based jail facilities, adding more jails to this network will only relocate and intensify human rights abuses.

Instead of building more jails, billions of New York City funds should be poured into ending homelessness, addressing NYCHA repairs, and handling a host of other community needs that would do much more to build safer and stronger neighborhoods than jails ever will.

No New Jails NYC (NNJ) is a multiracial, intergenerational network of residents, community members, and activists fighting against Mayor Bill de Blasio’s jail expansion plan. NNJ calls for the immediate closure of Rikers without building new jails. Instead of spending billions of dollars on more jails, NNJ demands massive investment to address the needs of communities targeted by criminalization. Ultimately, NNJ is organizing towards a safer NYC free of confinement, surveillance and filled with opportunities for all people to thrive. 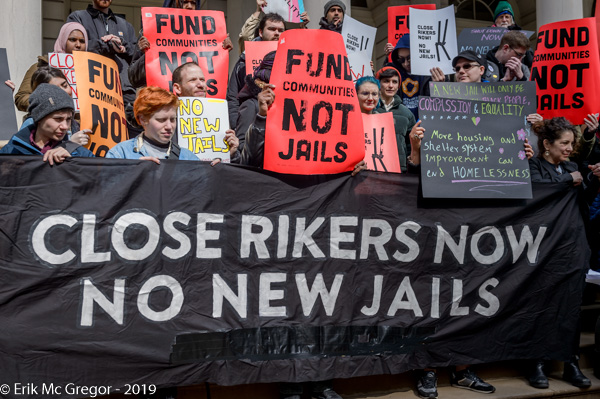