New York, NY – As Fox News is trying to persuade its advertisers that its many controversies are over, hundreds of activists gathered outside Fox News HQ in New York City on March 13, 2019 to make sure ad buyers know when they advertise on Fox News they’re sponsoring bigotry and hate and to to send a clear message to all media buyers that Fox News’ toxicity is bad for business.

Fox News is bad for business. Companies that do business with Fox News are financially supporting the network’s toxic bigotry and propaganda. Take action. Tell advertisers to #DropFox.

Fox News has lost so many advertisers that the network is having an emergency meeting at its headquarters this Wednesday, March 13 to try to stop advertisers from fleeing the network.

Now is the time to make our voices heard. Sponsoring Fox News is a choice. When companies advertise on the network, they support bigotry, rank propaganda, and dangerous conspiracy theories.

Fox News executives don’t care. They have done nothing to hold their talent accountable for the toxicity that they regularly spew. To the contrary, bigotry and propaganda are encouraged at Fox. Enough is enough.unprecedented

Every spring, networks have so-called “upfronts”, where they sell advertising for the year ahead. In May of 2019, Fox News plans to sell about 60-70 percent of all of its advertising for next year, 2020. This is a really important moment for the network. But the situation at Fox News is so dire that Fox is not waiting until May.

For the first time ever, Fox News is having an emergency mini-upfront at its headquarters on Wednesday, March 13. At this event, Fox will try to pitch advertisers who have fled that they should come back – especially to advertise on the network’s “news” programming – and that their remaining advertisers should increase their buys. But advertisers should not be fooled: No matter when you advertise on Fox News, you support the network’s extremism and bigotry. Quarantining your ads to only a small subset of programs will not insulate your brand from public rebuke when Fox News’ next controversy strikes. Both the “news side” and the “opinion side” are cogs in the same propaganda machine. The network as a whole is the problem, not merely a few prime-time hosts.

Fox News is a malevolent and destructive force. Not only is the network’s programming becoming increasingly extreme, deceitful, and racist, but Fox News is also functioning as Donald Trump’s personal propaganda operation. As the network helped fuel hysteria over a migrant caravan thousands of miles from the border and Fox host Sean Hannity joined Trump at a campaign rally, a wide range of leading media voices began calling for corrective action. 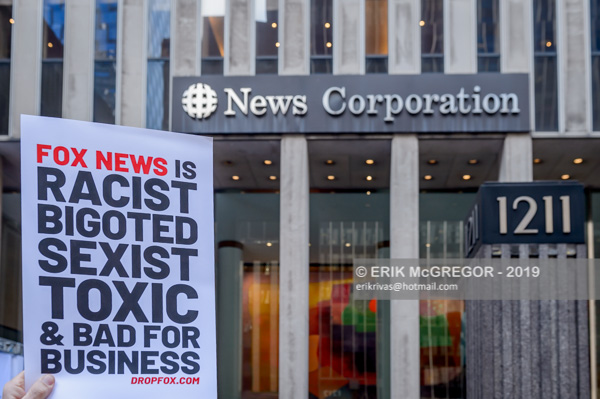