New York, NY – 20+ organizations and individuals including LGBTQ+, immigrant rights, harm reduction and criminal justice reform groups, led by people who trade sex, held a press conference on February 25, 2019 at Foley Square, to launch Decrim NY, a coalition to fight for the rights and safety of people who perform sexual labor by choice, circumstance, or coercion, people profiled as such, and communities impacted by the criminalization of sex work and sexual exchange. In collaboration with Assembly Health Committee Chair Richard Gottfried, Senate Labor Committee Chair Jessica Ramos, and Senate Women’s Health Committee Chair Julia Salazar, the coalition announced the intention to introduce the most comprehensive state-level sex work decriminalization bill in the country this spring. At the city level, Decrim NY is advocating for the diversion of funding from vice policing and arrest-based mandated services to non-arrest harm reduction services for people trading sex provided by organizations led by and for people who trade sex.

“As a transgender woman who did sex work, I have experienced oppression and prejudice from the police, immigration authorities, and even social service organizations because I was trading sex,” says Cecilia Gentili, a member of Decrim NY’s Steering Committee. “Until we decriminalize sex work, the people most impacted by criminalization—trans people, people of color, and undocumented people—will continue to be treated as less than the full humans they are.”

Decrim NY’s vision for comprehensive decriminalization of sex work in New York focuses on repealing misdemeanor prostitution charges for transactions between consenting adults, including patronizing and promoting charges, and erasing prostitution records so that sex workers and trafficking survivors can move on with their lives.

The comprehensive legislation also includes two existing bills that the coalition seeks to pass during this legislative session, the first of which [S03181/A00982] would allow survivors of trafficking to vacate all convictions where the offense was a result of being trafficked, and the second of which [S08107/A09704] would repeal the loitering for the purposes of prostitution statute, which profiles, harasses, and criminalizes women of color, especially trans women of color.

“Trying to stop adult sex work shouldn’t be the business of the criminal justice system. Throughout history, it hasn’t worked, and it makes things worse. Decriminalizing adult sex work is harm reduction,” said Assembly Health Committee Chair Richard N. Gottfried. “Criminalizing prostitution doesn’t stop it – it just drives it into the shadows where sex workers face increased violence, abuse and exploitation. Keeping sex work criminalized makes it harder to enforce laws against human trafficking and sex with minors. Decriminalization means increasing access to legal assistance, health care, and employment rights for people who today and historically have been working in an underground economy. Sex workers will have rights as working people. Working legally would give them greater ability to refuse clients, which is critical to personal safety.”

“Full decriminalization of sex work is desperately needed both because it safeguards the human rights and safety of sex workers and because it is an essential step towards being able to effectively investigate and disrupt human trafficking networks. The climate of fear and intimidation caused by criminalizing sex work makes it very difficult for sex workers to seek any kind of redress for labor issues or to report the various kinds of abuse many endure in silence. Sex work is work and we need to start treating it as such.” Senator Julia Salazar, Chair, NYS Senate Committee on Women’s Health.

“This session, the Legislature should pass the bills to broaden our successful record-clearing law for trafficking victims, which has been widely copied and broadened in several states, and repealing the loitering statute. We’re working out the details for a full adult decriminalization bill, and plan to introduce that soon.” Assembly Health Committee Chair Richard N. Gottfried.

“Until sex work is brought out of the shadows, sex workers will be forced to remain one of the most vulnerable working populations in the world. If we are to be in favor of workers’ rights, then we must seek to decriminalize sex work because only then can we provide protections and decent work conditions for all.” Assemblymember Dan Quart.

“Queer and trans youth trade sex seven to eight times as frequently as other young people in New York City. This is often their only means of economic survival. The over-policing of these youth further isolated them, and creates barriers to accessing healthcare and to reporting abuse. Prosecuting these youth can lead to a lifelong criminal record, which could negatively impact their ability to find housing, jobs, or adjust their immigration status. Decriminalizing sex work is the essential first step of empowering these young people, and enabling them to have a future.” Jared Trujillo, Association of the Legal Aid Attorneys and Decrim NY Steering Committee Member.

In addition to Salazar, Ramos, Hoylman, and Gottfried, Assemblymembers Linda Rosenthal and Dan Quart, as well as City Councilwoman Carlina Rivera, attended the launch rally and press conference and spoke in support of the rights and safety of people trading sex. Coalition members representing black, LGBTQ, Translatinx, Asian migrant, and other communities shared personal stories about how policing and criminalization have impacted their right to work safely free of violence and stigma. 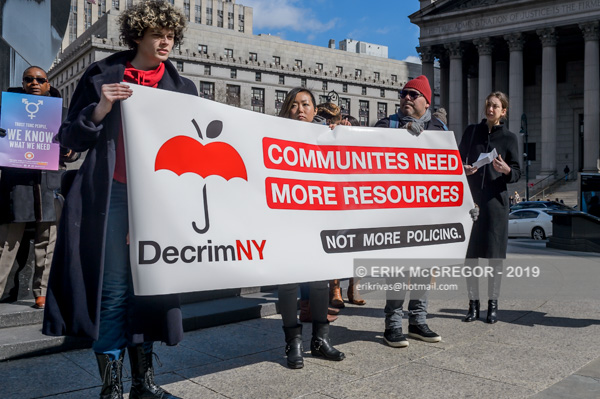