NEW YORK, NY – Hundreds of people from all walks of life gathered for a demonstration on February 18, 2019 in Union Square, in response to Donald Trump’s national emergency declaration, a move perceived as an unnecessary executive power grab in an effort to appeal to his base, rather than a response to an actual emergency, allowing the administration to allocate billions of federal dollars to the construction of the U.S.-Mexico border wall.

Even after Democrats cut a bad deal that handed Republicans more detention beds on the border and additional funding to pursue their racist agenda, Trump still wasn’t satisfied. So now he is undermining the Constitution and putting himself above the law to get what he wants.

Donald Trump issued a national emergency declaration last Friday in an attempt to subvert Congress and build a wall along the U.S.-Mexico border, Trump is facing potent and angry opposition from all sides—with legal action almost certain, mass public protests being planned, and renewed talk of impeachment—as critics argue that while Trump has created a fake emergency to fulfill his xenophobic campaign promise about the wall, the real emergencies are ones he created himself and others he and Republicans continue to ignore.

Trump has just declared a national emergency, in the absence of any actual emergency, for the purpose of spending on a border wall money that had been appropriated for other purposes. In so acting, President Trump has violated Article 1, Section 7 of the United States Constitution: “All Bills for raising Revenue shall originate in the House of Representatives . . . .” and Article 1, Section 8: “No Money shall be drawn from the Treasury, but in Consequence of Appropriations made by Law . . . .” and the Federal Anti-Deficiency Statute, as well as the Posse Comitatus Act.

Trump has abused his power by publicly promoting his latest unconstitutional action using a series of falsehoods encouraging fear, bigotry, and hatred. He has falsely suggested that immigrants commit crimes at a higher rate than non-immigrants, that illegal border crossings have been increasing in recent years, that terrorist groups have sent operatives to enter the United States through Mexico, and that applying for asylum is a threatening or criminal action. 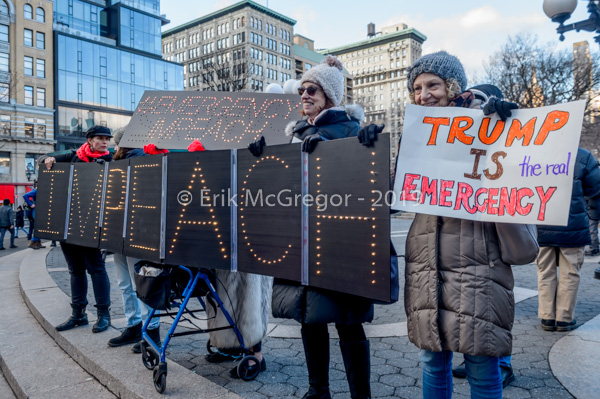