Princess Soleia, a leader of the Renewable Rebellion, has fought alongside the people to stop the expansion of fracked gas infrastructure and to build community owned solar and renewable heating.

The private electric utility Empire and their emissary Darth VDER have pushed for the expansion of fracked gas infrastructure for heating, as well as complicated market concepts that are crushing community solar and denying renewable power to many New Yorkers.

The galactic leader and her Renewable Rebel Alliance were in Albany to witness how the PSC would rule on Con Edison’s “Smart Solutions” proposal, which is one part of how the utility is addressing growing demand for gas in Westchester County. The “Smart Solutions” proposal from Con Edison includes alternatives to gas, like geothermal and air source heat pumps, and gas reduction programs like efficiency and demand response. But the proposed portfolio also includes 2-5 new fracked gas storage facilities in Westchester and a fleet of gas-carrying trucks, dubbed by gas opponents as “bomb trucks” because of the possibility for an explosion.

Unfortunately, the Public Service Commission approved Con Edison’s gas projects along with the new investments in efficiency and heat pumps that the Renewable Rebel Alliance had been calling for. Despite the ongoing climate crisis, the Public Service Commission declined to fully embrace a future without climate-killing fossil fuels and instead will permit the utility to build more gas into its system.

In response to the decision, Courtney Williams, who sits on the City of Peekskill Conservation Advisory Council, said: “I was appalled that none of the questions or comments from the PSC addressed the issue of public health and safety. Transporting fracked gas by truck on crowded roadways is risky. Building liquified natural gas storage in Westchester communities puts them at risk. I was also struck by the PSC’s business as usual attitude. We are in the midst of a climate crisis. The PSC needs to stop pretending we have a choice about when to move to renewables. There is no choice. It must happen now. They need to realize that the ConEd moratorium is a chance to make that move. In light of the Governor’s State of the State address during which he doubled down on renewables and a commitment to moving New York to 100% renewable energy, I would expect him to instruct the PSC to reject Con Ed’s gas plans and push forward with the renewable heat plans.”

Princess Soleia put her arm around her comrade and said: “We are at a crossroads in Westchester and many parts of New York, and it’s the moment to decide whether we will follow the dark side of fossil fuels or whether we will invest in the renewable energy future that climate scientists say we need in order to protect the planet’s ability to sustain life. While some parts of the ConEd proposal, like investments in energy efficiency and renewable heating, are good for the environment, NY’s economy, and a livable planet, it’s clear that the overwhelming power of the corporate utilities conned the PSC to approve false solutions such as fracked gas storage and bomb trucks, putting the people of Westchester and our entire planet at risk. The Renewable Rebel Alliance will not give up. The tighter the private utilities try to grip our energy system, the more communities slip through their fingers. We will continue to fight for a renewable energy future, whatever the odds.”

Epilogue: In the next episode of the Public Service Commission meetings, the agency will determine whether to rein in the destruction on community solar caused by Darth VDER (Value of Distributed Energy Resources). Princess Soleia and the Renewable Rebellion plan to use the Force of public participation ahead of the next PSC meeting in March to show that New Yorkers are calling on the PSC to fix the problems with VDER, the state’s policy for valuing solar energy, and to stand up for community solar power for all New Yorkers. 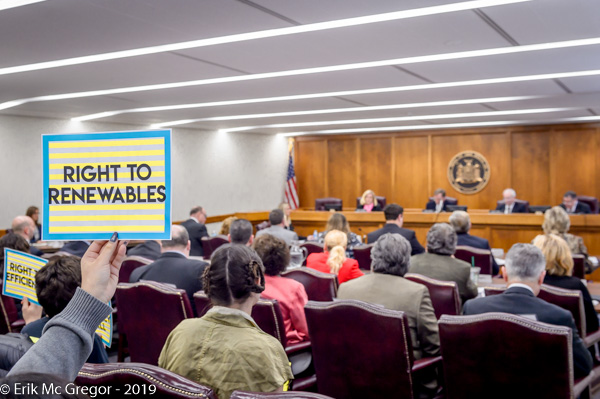