New York, NY – In protest of Trump’s State of the Union speech, activists spread “Arrest Trump” message across New York City. On February 5, 2019, activist groups calling for the arrest of the President held a demonstration outside Trump Tower in Manhattan.

Activists displayed ‘ARREST TRUMP’ banners inside and outside of Grand Central Terminal this afternoon in a lead-up to the Trump Tower protest.

With signs and chants denouncing Trump’s crimes since he took office, New York City activists organized a demonstration outside Trump Tower on the day Trump is scheduled to deliver his delayed State of the Union address.

Rise and Resist calls for Donald Trump to be stopped from continuing his crimes against our country. In the US, no one is above the law. The number and level of crimes Trump has committed is unprecedented, and the legal opinion that a president can’t be indicted while in office is not law, is not in the constitution, and has never been tested in court.

One definition of arrest is to “seize (someone) by legal authority and take into custody”. Another definition is to “stop or check the progress or a process”. We call for the President to be impeached, indicted, and prosecuted.

Stephen Miller, the architect of Trump’s war on immigrants, is writing Trump’s speech. It will be full of lies. Trump will defend his policies, and the government shutdown, by demonizing refugees and by claiming that the lack of a border wall is a national security emergency.

We are in a state of emergency, but the causes of it are Trump, his administration, and the politicians who are complicit with it. Silence is not an option. We will bring our “huge” ARREST TRUMP banner to 5th Avenue, and posters that highlight Trump’s crimes. 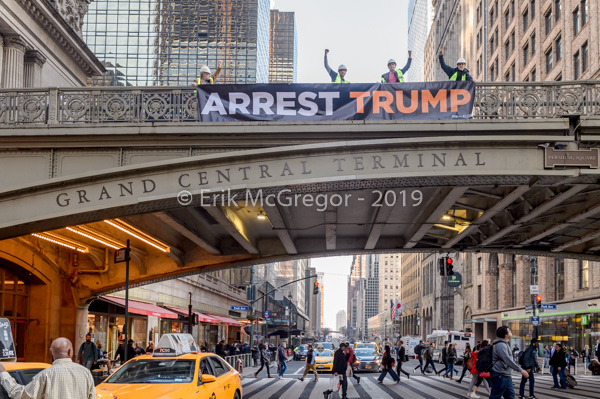