New York, NY – Immigrant rights activists and interfaith clergy took a vow to stand united and break down walls of hate holding a peaceful prayer circle and action to #BreakDownWalls in solidarity with the Migrant Exodus and all immigrants on December 8, 2018 at the Statue of Liberty, the iconic New York City location.

The Activist groups are demanding that Democratic leaders Sen. Chuck Schumer and Rep. Nancy Pelosi to block funding for Trump’s wall and the expansion of ICE and CBP, and hold them accountable if they don’t.

Tear gas attacks on Central American refugees. Children ripped from families at the border. This is Trump’s America – a country where freedom and justice for all is replaced by xenophobia and hate.

If we care about the future of our country and protecting our communities, We the People must stand united and break down walls of hate to protect asylum seekers, resist Donald Trump and Republicans’ racist agenda.

Movimiento Cosecha is a nonviolent movement fighting for permanent protection, dignity, and respect for the 11 million undocumented immigrants in the United States. 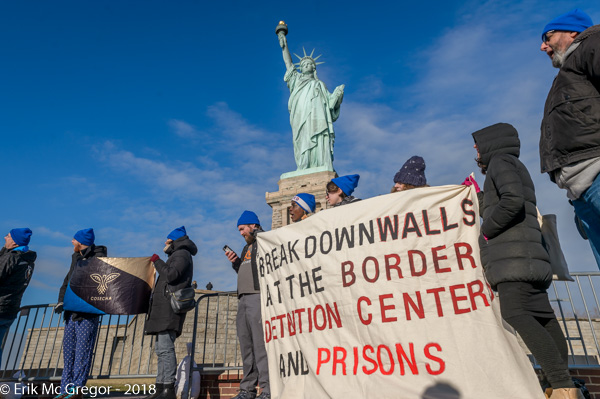