New York, NY – Hundreds of protesters, including moms, kids, immigrants and allies, rallied outside JPMorgan Chase headquarters in New York City on September 26, 2018, to deliver hundreds of thousands of petitions and letters urging the bank to stop financing Geo Group and CoreCivic, two large for-profit prison corporations profiting from immigration detention centers.
Earlier this year, Mariee, a 19-month old toddler, died shortly after being released from a CoreCivic-run immigration detention center in Dilley, TX – where there have been reported cases of negligence and abuse. A vigil for Mariee Juarez was held as part of the action.
A similar action was also held at Wells Fargo headquarters in San Francisco today against the bankrolling of for-profit prison corporations that are profiting off the pain and separation of immigrant families.
The day of action was led by the #FamiliesBelongTogether coalition, which has helped lead the fight against the Trump Administration’s cruel immigration policies since organizing the historic national day of action. The coalition is made up of more than 100 organizations representing tens of millions of members nationwide, including MomsRising, Presente.org, National Domestic Worker Alliance, the Center for Popular Democracy, MoveOn, Make the Road New York, Hand in Hand, In The Public Interest, Little Sis, AVAAZ, Enlace, Candide Group, CREDO, CMSM, Courage Campaign and more.
In all 50 states, more than 7,000 people have committed to deliver letters urging local JP Morgan Chase and Wells Fargo branches to stop financing Geo Group and CoreCivic. Protesters will also deliver more than 400,000 signatures and letters to these companies, which they deem to be #BackersofHate, alongside symbolic items like stuffed animals and blankets to represent the children still detained and separated from their families. Just this week, the Trump Administration escalated its attacks on immigrants by pushing out a new “public charge” regulation proposal that, if adopted, would make immigration a pay-to-play game, putting the wealthy ahead of families who’ve waited years to be reunited.
Yaritza Mendez, Immigration & Civil Rights Coordinator at Make the Road NY, said, “We have stood outside Jamie Dimon’s house and played for him the cries of immigrant children. Now we stand outside his office because one of those children has died. JPMorgan Chase has refused to withdraw from financing private prisons and immigrant detention companies despite the horrors taking place at their facilities. Our loved ones and neighbors are being criminalized and put in cages, and it must end. We will continue to stand up to JPMorgan Chase and Jamie Dimon until they stop bankrolling oppression.”
Approximately 71% of the average daily population in ICE custody are held in privately operated jails. Since ICE was created in 2003, 85 detention centers nationwide have reported a total of 176 deaths. CoreCivic and GEO Group depend on debt financing from banks, including JPMorgan Chase and Wells Fargo, to conduct their day-to-day business operations, finance new facilities, and acquire smaller companies.
An analysis of U.S. Securities and Exchange Commission (SEC) filings over the past ten years shows that Wells Fargo and JPMorgan Chase has played a leading role in financing these debts. JPMorgan Chase is the single largest financier to GEO Group and CoreCivic, holding 62 percent more debt than the second biggest lender to these two corporations. In doing so, these companies are complicit in and profiting from the mass incarceration and criminalization of immigrants and continuing detainment of immigrant families by the Trump administration.
The millions of Americans represented by the #FamilesBelongTogether coalition, made up of more than 80 organizations, call on Wells Fargo and JPMorgan Chase to end this complicity and immediately stop their financial support for GEO Group and CoreCivic, private prisons that are profiting from mass incarceration and the criminalization of immigration. 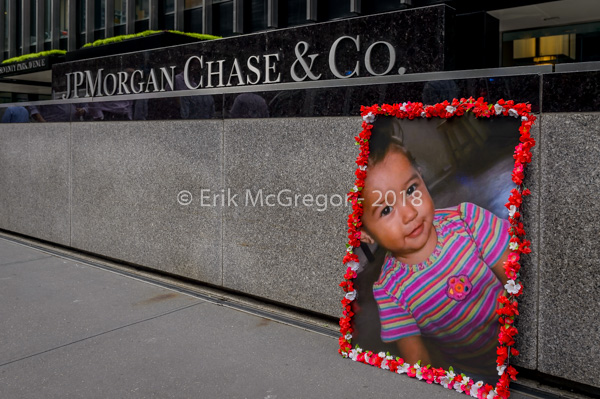