New York, NY – Members of the activist group Rise and Resist organized a protest outside New York City Hall on July 30, 2018 as part of the four days of protests targeting local politicians and business profiting from ICE. Activists demand Mayor De Blasio to follow the lead of other cities, states, and lawmakers by standing up to ICE.
NYC Activists devoted four days to Abolish ICE protests, targeting NYC Mayor De Blasio, Governor Andrew Cuomo, Senator Chuck Schumer, and Wall Street businesses that profit from ICE
ICE, formed in the panic after the 9/11 attacks, has itself become an instrument of terror, raiding courts, schools, and the homes of our neighbors. ICE targets productive, peaceful New Yorkers, almost all people of color, many of whom have lived and worked here for years.
Rise and Resist expands the growing movement to Abolish ICE by calling on city and state government, along with banks and other corporations, to step up and protect immigrants from the arbitrary cruelty of ICE. Lacking responsible federal leadership, the rest of us must abolish ICE by defying it and limiting its powers. If you are not protecting immigrants with all the tools at your disposal, you are complicit.
Rise and Resist will demand that Mayor de Blasio (Day 1), Governor Cuomo (Day 2), and Senator Schumer (Day 3) follow the lead of other cities, states, and lawmakers by standing up to ICE. On Day 4, we call on individuals and businesses to stop funding the corporations that profit from the brutal imprisonment of our neighbors.
At each action, we’ll present demands – concrete steps – that each person or entity can take to make this city, state, and country safer for all of its residents. Demands include:

Rise and Resist is a direct action group committed to opposing, disrupting, and defeating any government act that threatens democracy, equality, and our civil liberties. Previous Rise and Resist actions include an Abolish I.C.E. banner drop at the Statue of Liberty, an occupation of the Trump-managed Central Park ice skating rink, dozens of demonstrations against the New York State Senate members of the IDC (Independent Democratic Conference), and protests against the MTA and Governor Cuomo for failing to include working elevators in the vast majority of NYC subway stations.

Members have also participated in mass civil disobedience including the 6/28 protest of child separation at the Hart Senate Office building, at which over 600 women were arrested, and last summer’s wave of protests of the attempted repeal of the Affordable Care Act. 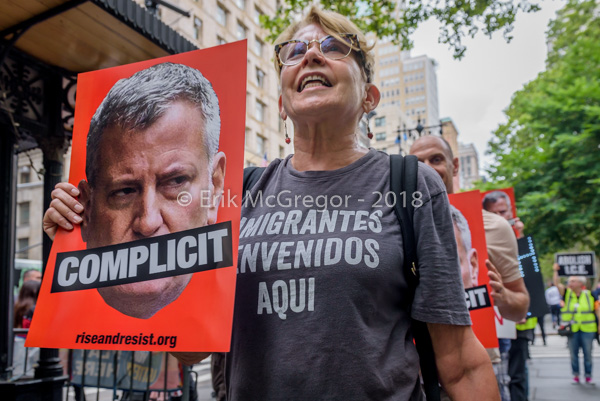